The ability to combine design and research, which is at the very heart of the architectural pursuit of innovation, is also the defining characteristic of Sara De Giles Dubois, 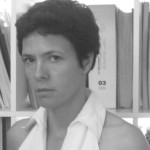 a Sevillian architect who has always alternated between design practice and the teaching of architecture, both as professor at the Seville School of Architecture and as a visiting professor at various European and American universities. Her work as a member of the MGM Morales de Giles Architects studio revolves around participation in a large number of competitions, with a strong interest in public architecture and social housing in particular. One of her most interesting works is the theatre complex in Níjar, Almeria (2010). The building makes use of strict volumetric masses that interpret the typological theme of the theatre as a machine for vision in reinforced concrete, placing the public in contact with two different landscapes: the inner and the outer. www.moralesdegiles.com

Sara De Giles Dubois, Doctor of Architecture, has taught at the Seville School of Architecture for more than 15 years. She has also been invited as visiting professor to several universities in Europe and America. Her close ties with the university department of architectural design are paralleled in the strong research focus of her professional practice, not only in design, but also in key construction issues. Sara De Giles has developed a strong interest in typological and formal research in a constant exploration of the new scenarios in current architecture.  Her work as a member of MGM Morales de Giles Architects has been developed mainly in conceptual competitions, both public and restricted. The competitions have enabled her to consolidate her strong interest in public architecture, both public facilities and social housing. She expresses her values through social, environmental end economic sustainability. Her projects aim to achieve quality solutions at every stage, strong consistency among all aspects of the project and close attention to detail through absolute control of materials and technological solutions. Consequently, her work has developed with a focus on quality, technology and innovation. These are Sara de Giles’s motivations in accepting the honor of a nomination for the Italcementi Group “arcVision Prize – Women and Architecture 2016”.

Today’s housing estates on the outskirts of our cities reveal the coarseness of the built landscape, in which it is hard for the passer-by to get a visually attractive overview of the surroundings. One of the possibilities architecture has for coexisting in these deteriorated environments is to bring the landscape and its experience closer to the dimensions of the body, through the eye. Nancy Holt created installations in the 1960s in which she shows how the individual can make a space and a landscape, the body and the gaze, coexist in a friendly manner. Designing a work of architecture at the human scale does not mean making it homothetic or proportional to man’s measurements, but ensuring that it is capable of calibrating and measuring human sensations. Looking through a window as one looks through the hole of a bottle means making the landscape more subjective, if possible, accommodating it to the eye, selecting what  appears attractive to us. Likewise, making architecture surround the body, envelop and protect it, is tantamount to making the architecture lose something of what we normally understand as composition, and transforming it in resonance with the body itself. The plot of land is situated in an old area of terraced smallholdings that is all but invisible from the street. Only if we move to a distance can we make out the terraces that form one of the characteristic images of Níjar (Juan Goytisolo calls them Countryside of Níjar in his book of the same name). 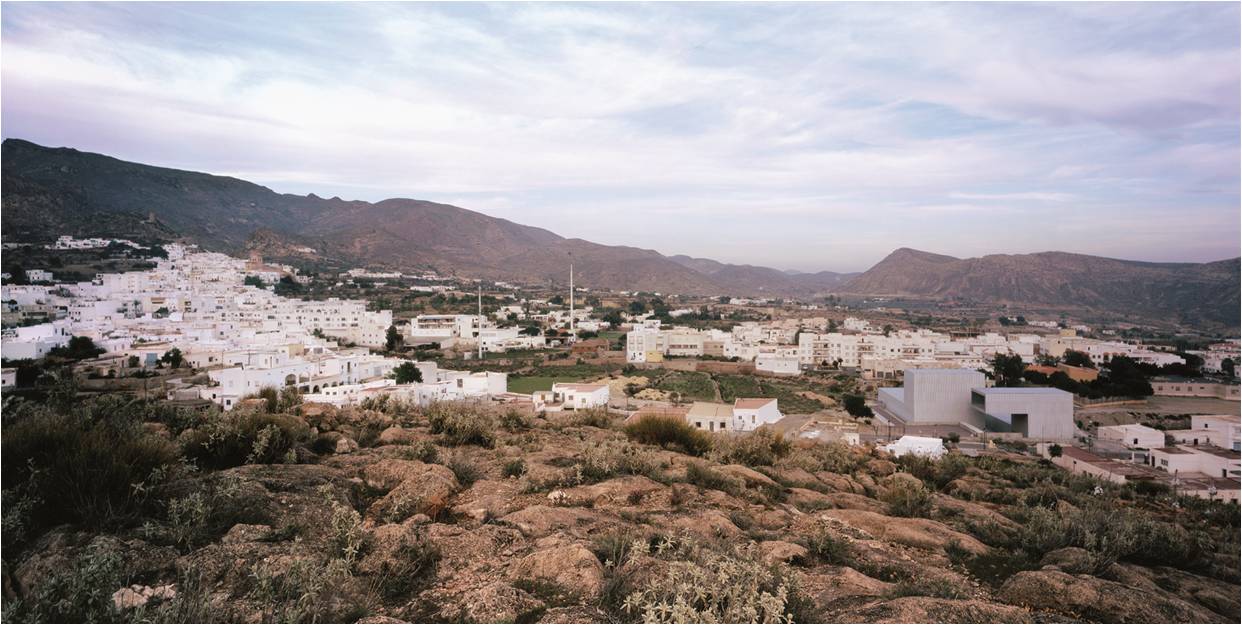 This project deals with the “natural history” of cities. A former mansion house whose homes have gradually subdivided the interior space into a number of partitions to suit people’s living spaces. The living areas are created by drilling a wall; the windows provide improvised rooms. Gazes towards the outside hierarchies and structure the floor plans of the different houses devoured by the primitive house. The streets that over time have ended in a built magma subtracted from the city, but which have multiplied the special sensations of the interior world of the old house: a “multitude house.”

From the point of view of the project, the problem hits you immediately: is it possible to formulate “a project” for this residential archaeology? We decided to enhance the “multitude house” phenomena, so the job was to make the meeting between space and dwelling evident. The project could not be posited as an issue of adjusting surfaces—that is to say, of resolving the square meters of each apartment in the big, primitive house; rather it was essential to increase the quantity of histories and phenomena that fit into a cubic meter. At the request of the Office for Rehabilitating the Historic Centre of Cadiz, we intervened in a former mansion house occupied by eleven families who seek a living space among the old walls of the Pópulo working-class district in Cadiz. As well as re-housing the maximum number of tenants, the re-utilization of the historic structures enables a drastic change to be achieved in the residential programs: to exchange the concept of the square meter with that of the cubic meter; instead of working with flat surfaces, we work with volumes.

Surface and volume are two very different concepts architectonically. The first amasses the population in standard units related to the concepts of minimum, social or protected housing (according to the parameters used); the second has to do with the concept of space. The first is linked to planning, then to typology, but always to rationality and the cost-effectiveness of the operation; the second is designed in terms of the dwelling of the tenants, in terms of their own bodies; its idea of economy is radically different. The objective, then, was to relocate the current tenants in the same building and to improve their living conditions without foregoing the memory of them. Another responsibility of the project was to restore the families’ own understanding of home; that is, to re-create the intense relationship between private and communal spaces that characterized the original building so much. To equip the apartments with modern technological advances and to endow the inhabitable spaces with ventilation and illumination, with a nod in the direction of our own time yet without falling into the trap of standardization. 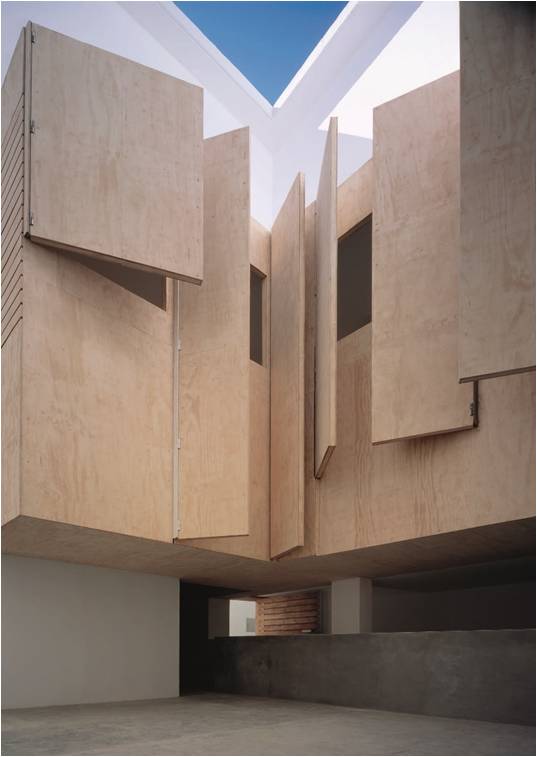 The growth of the contemporary city leads to an architectural project approach in which it is impossible to distinguish between countryside and city. The line that until recently separated the built terrain from the rural landscape is ever more blurred. Architecture and countryside are superimposed and force us to investigate these so-called intermediate pieces of land.
These intermediate pieces of land have the distinction of combining different natures, in which infiltrations are produced between the natural and the artificial, a suggestive theme for the contemporary project inasmuch as it enables references from the non-built landscape to be included as if it were one more possibility among many. Moreover, the natural landscape must be thought of as something compatible with an architecture that, above and beyond camouflaging itself with nature, re-utilizes nature’s own scales, measurements, coloring and forms. In short, this means making architecture and nature compatible by going beyond the classical concept of an object against a landscaped background, which leads us to think of an architecture conceived and developed as a kind of nature, a nature that is surveyed and measured like architecture.
Pablo de Olavide University is situated on the outskirts of Seville, in the former Workers’ University. Given the growing demand for new classroom blocks and students’ residences, the university called an ideas competition for such installations, as well as for planning the development of the campus. On the basis of the competition’s winning proposal, it commissioned a building with 24 classrooms and offices from us in the new growth area. Situated in a field of sunflowers, the new classroom block seeks to be the first building in the future extension of Pablo de Olavide University in the direction of the farmland.

This project is concerned with the growth of cities by proposing to increase the city. We are accustomed to the form of the city, what constitutes it is negotiated separately; that is to say, someone traces the urban form and the buildings are set in place afterwards. This creates at least one problem: only with difficulty are buildings integrated with the city.
The project proceeds from the conviction that, due to its large size, the future building must be conceived as a part of the city. Consequently, we proposed a work that includes a wide street from which to connect the whole complex program of this hospital; at the same time the street would have to accommodate a variety of lobbies – terraces overlooking the rural and urban landscape—at various levels. These lobbies are central to the organization of the rooms and provide a relaxation space for visitors and staff. Therapeutic miradors are involved that reconcile bodies and spaces and propose a complicity of the gaze intersecting with the historic city and the complexity of programs of the contemporary city.
The building aims to combine the rationality of the functional program and the helpfulness and friendliness of the interior spaces. We proposed a highly rational floor plan consisting of bands of south-facing functional packages. The main advantages are the shortening of trajectories, insolation of the rooms and the predominance of the building’s horizontality as opposed to vertical communication. The floor plan is organized around three longitudinal patios, one of which houses the building’s general entrances, and the other two the organization of the floors with the patients’ rooms.

Her awards for built works include: as an associate of MGM Morales de Giles architectes the First Prize of Spanish Architecture 2013, First Prize at AIT Award 2012 and 2014, a selected work for the Mies Van der Rohe Award 2009, First Prize at NAN Awards 2012, First Prize at Sánchez Esteve Awards 2008, a Mention at the European Wallpaper Design Awards, best new public building 2008. A Special Mention at X Spanish Architecture Biennial awards 2009. Finalist at Swiss Architectural Awards 2009/2010, Special Mention at the UGO RIVOLTA 2013 Award.
Sara De Giles’ work was exhibited at the Museum Of Modern Art in New York in 2006 at the exhibition “ON-SITE New Architecture in Spain”. Her work has also been exhibited at the Venice Architecture Biennale in 2000, 2002, 2006 and 2014, at the Spanish Architecture Biennale in 2001, 2007, 2009 and 2013, and at the exhibition in the “Cité de l´architecture et du patrimoine”,  Palais de Chaillot, Paris, France (2008, 2009). Her work has been published in many books and magazines about national and international architecture. As an MGM partner, she has edited a number of monographs: “Obra y proyectos”, published by Editorial Rueda (2004), for the Editorial Irreversible publishers (2009) or for the 2G international monographic magazine published by Editorial Gustavo Gili (2010) and the international monographic TC cuadernos (2012).