arcVision no. 31 is a reflection on the effects of the Digital Revolution in the life of third-millennium man. Is man the winner or the loser? Is technological innovation an extraordinary driver of economic and social growth or a force alienating and depersonalizing the individual? We are witnesses of a transformation in the concept of work and enterprise that requires us to rethink our production and organizational models. 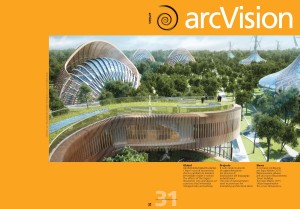 “The world is liquefying. The economy is dematerializing. And I’m not feeling too solid myself.” This paraphrase of a famous remark by Woody Allen puts a spotlight – albeit with a touch of irreverent humor – on the shape of the post-IT revolution with the development of the ‘information society’  and  the  transformation of the paradigms that, until yesterday, supported the development inherited from the industrial revolution. Twenty years after the ‘information superhighways’

launched by AI Gore and the Delors Report setting out the steps to take into the XXI century to overlay technological determinism with the need for knowledge and continuing education in a definitively global society, commentators today discuss how digital knowledge (an incredible and unstoppable series of ‘Os’ and ‘1s’) is now a key factor in productivity and growth, influencing every activity of contemporary man.

As Erik Brynjolfsson and Andrew McAfee of the MIT Center for Digital Business write in The Second Machine Age: Work,  Progress, and Prosperity in a Time of Brilliant Technologies, we have entered a second machine age. The first age, brought in by the Industrial Revolution, saw machines help us eliminate the limits of our muscle power, changing the physical world. In the second age, we are doing the same thing with our brain power, our cerebral activity. Both the first and the second machine ages have had enormous effects on economic growth. The first age was truly the most important development in the history of man in terms of improvement in standards of living, and we believe the second age will have a similar impact on the economy.”

The digital transformation is an unstoppable global phenomenon, which, like every technology, creates and destroys employment. While many functions will now be performed by machines, other new professions will develop. Institutions, governments and businesses have to rethink the very concept of work, learning to move at the same speed as innovation. New social contracts that respect workers’ dignity, support to help entrepreneurs create new activities and new jobs, investment in human capital through schooling and continuous education.

Will the ‘new machines’ take the place of the human workforce and turn into a permanent threat of technological unemployment? Are we about to enter the age of “The End of Work predicted by Jeremy Rifkin in his 1995book? Will hyper-connected smart technological devices threaten man’s central role as the key player in production processes? Will the ‘big data’ packed increasingly tightly in the clouds of widespread knowledge really be able to generate new wealth and sustainable economic and social growth? The gauntlet has been thrown down for new organizational and relational strategies. Whether we are achieving greater happiness,  the ultimate goal of the human race, is still a moot point.

As observed by Kevin Warwick, professor of cybernetics at the University of Reading and described by some as the leading British prophet of the robot age”, Deep Blue may have been the first computer to win a chess match against a reigning world champion, but it is less intelligent. Garry Kasparov “knows” he lost, whereas Deep Blue, which simply processed a sequence of ‘0’ and ‘1’ combinations more efficiently and effectively, still doesn’t know” it won.