The central design strategy in the work of Špela Videčnik and her studio OFIS arhitekti – founded in 1996 with Rok Oman – consists in transforming restrictions into opportunities, and thus implements a certain subversive tactic that finds in the rules an opportunity to overcome those same rules. 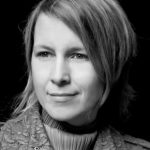 It is an approach that the Slovenian studio has put into place over the last two decades, focusing in particular on their participation in a number of international competitions, and winning them for, among others, the construction of residential units for 185 students in Paris in 2008, and for a football stadium in Borisov, Belarus, in 2013. The first project, completed in 2012, developed an innovative inquiry into the quality of study spaces and on the relationship between shared and private spaces. The unusual proportions of the construction area (11 x 200 meters) are displayed in a more accessible scale through an interesting trick on the main facade, consisting of a series of “baskets,” open gallery elements turned towards and away from each other and covered with strips of HPL wood. www.ofis-a.si

“OFIS projects always start with the search for a critical issue relating to the program, site or client. Their design is not about surpassing, confronting, ignoring or disobeying the rules and limitations of each project. Rather, they plunge right into them and obey the ‘law’ literally, word by word if need be, and at times even exaggerate it. Restrictions become opportunities for an architectural system. In this sense, the projects become subversive, turning the limitations into operational tools and so exposing all of the different possibilities. All of a sudden, the architectural strait-jacket becomes a beautiful robe.”

The project is located on a long and very narrow site, on the edge of Parc La Vilette in Paris’s 19th district. On the northeast, a new Paris tram route passes along the site. The plot has a very particular configuration; 11m in width and extending approximately 200m north-south. The length of the building is divided into two parts connected with a narrow bridge. Between the two volumes is a garden. The building has 11 floors: a technical area in the basement, shared facilities on the ground floor, and student apartments on the upper nine floors. The main objective of the project was to provide students with a healthy environment for studying, learning and meeting. Along the length of the football pitch is an open corridor and gallery overlooking the city. This gives access to the apartments and provides the students with a communal area. All the apartments are the same size and contain the same elements to optimize design and construction. Each volume has two different facades according to function and program: • The elevation towards the Rue des Petits Ponts features basket balconies of different sizes made from HPL timber stripes. The shifted positions create a dynamic surface while breaking down the scale and proportion of the building. • The elevation towards the football pitch has an open walkway with studio entrances enclosed with a 3D metal mesh. The building is energy efficient. The apartments are cross ventilating and allow abundant daylight throughout. The external corridors and glass staircases also promote natural lighting in the common areas for energy efficiency, while also creating comfortable and well-lit social spaces. The building is insulated from the outside. Thermal bridge breakers are used on corridor floors and balconies. Ventilation is controlled by double-flow mechanical ventilation, providing clean air in every apartment with an optimum temperature throughout the year. The roof is covered with photovoltaic panels to generate electricity. Rainwater is harvested on site in a basin pool used for watering outdoor green spaces.

The concept takes into account the natural advantages of the location and the existing interventions, while maintaining as many of the site’s existing trees as possible. Besides 13,000 seats, there is 3,000 m2 of additional public space, with UEFA 4-star classification. Traffic and parking is organized in the woodland. The arena forms a unified rounded dome, giving the impression of a single enclosed object. The skin of the dome gives the impression of a delicate perforated textile stretched over the stadium skeleton. The covered space between the skin and the stands houses a public concourse, a vestibule with public amenities (shops, bars, services, toilets) and upper galleries (offices, VIP, press). Internally, the rounded arena provides good acoustics and encourages an extrovert mood among players and fans during the game, but focuses concentration during training. The playing surface has N-S orientation, with a total area of 85×105 m, of which 68x105m is used for playing. The remaining area provides space for advertising screens, photographers and cameras. The upper west gallery is reserved for press cabins with direct stairway access to the press room and mix zone. In the east, the VIP stands are directly accessed from an elevator from the entrance area with a car driveway. The athletes have a separate entrance on the lower platform, with a passage to team buses and parking. There are 4 floors with extra amenities and service facilities under the west stand area, and 3 floors under the east side. The foyer for visitors is located on the first floor and is a covered plateau, naturally ventilated and unheated. Extending all around the inner stadium arena, this space contains the visitor toilets, bars, first-aid room and rest room: it is a place to relax during half-time. Other public spaces are designed for various commercial activities. Around the platform is a rounded pedestrian piazza serving as a peripheral roundabout and meeting area. Parking is organized in the existing woodland area. 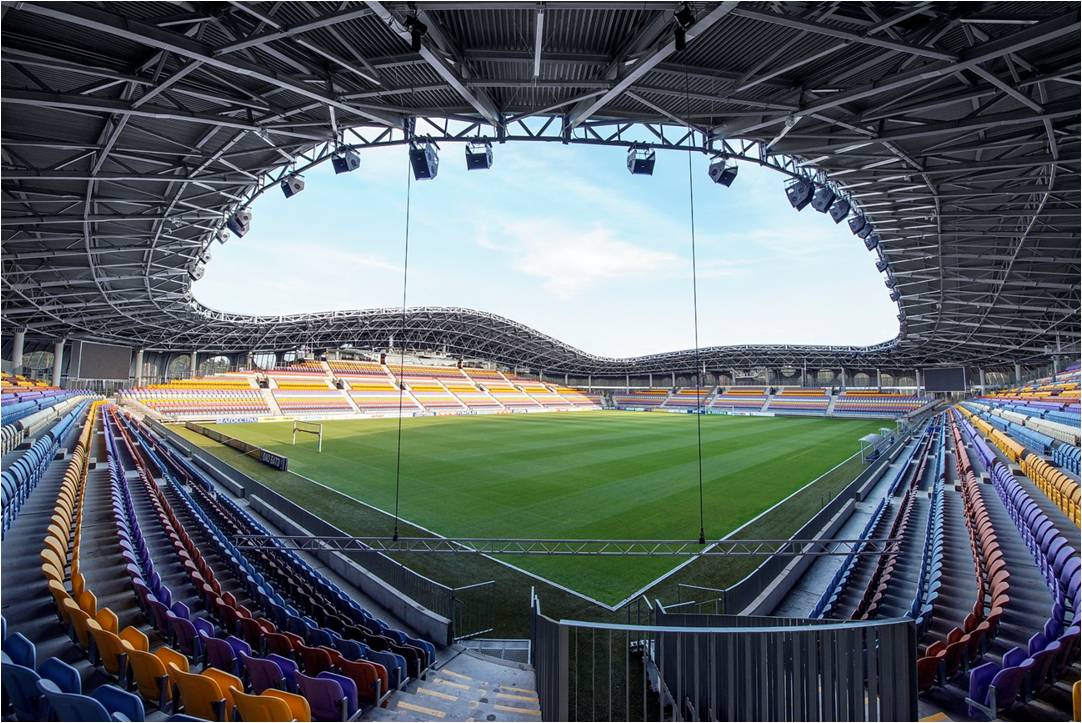 This project is the winning entry in a competition to design two social housing blocks, organized by the Slovenia Housing Fund, a government-run program that provides low-cost apartments for young families. The proposal won for its economic, rational and functional solutions and, above all, for its flexibility and the excellent ratio between gross vs. saleable surface area. Also, construction cost had to be at 600€ per m2 of net surface area. The brief required 30 apartments of different sizes, from studio flats to 3-bedroom apartments, for two blocks of 60 x 28 meters. There are no structural elements inside the apartments, thus providing flexibility and easy reorganization. The housing blocks are set on a hill with a view of Izola Bay on one side and the surrounding hills on the other. Because of the Mediterranean climate, outdoor space and shade are important elements. Sustainable balcony box Each balcony module is an efficient system that provides shade, ventilation and thermal comfort on the balcony and also in the apartments. Fabric blinds installed on the front of the balconies block direct sunlight and permit a warm-air buffer to build up, which provides additional heating for the apartments in the winter. In the summer, the hot area behind the shades is naturally ventilated through 10 cm perforations on the side partitions of the balconies. 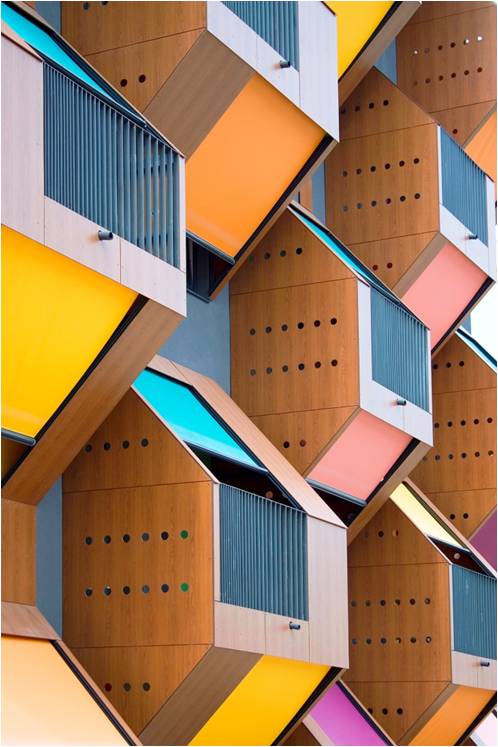 The farewell chapel is located next to an existing graveyard in a village close to Ljubljana. It was designed for the needs and traditions of the small community of Krasnja
The chapel is integrated into the hill following the rising contours of the landscape around the graveyard.
Three embracing curved walls divide the space into separate zones: a service area, an interior farewell space, and a large chapel plateau that opens on to the surrounding hill. A concrete retaining wall divides the plateau from the surrounding hill, creating an external curve around the farewell chapel. The internal curve which encompasses the main farewell space is a partly glazed larch dressed wall, overlooking a small entrance square used for outdoor funeral gatherings in the summer. The service spaces such as restrooms, a kitchenette, storage and wardrobe are distributed along the back wall. The roof, which can be accessed via a  ramp, has its own curve. It provides partial cover for the entrance square, offering shelter from the rain and sun.
The cross
Instead of a visible Catholic symbol, the cross is silently integrated into the building, cut into the concrete roof. From the inside of the building, it appears as a central skylight above the main farewell space; from the roof top, it acts as a landmark laid in the landscape. 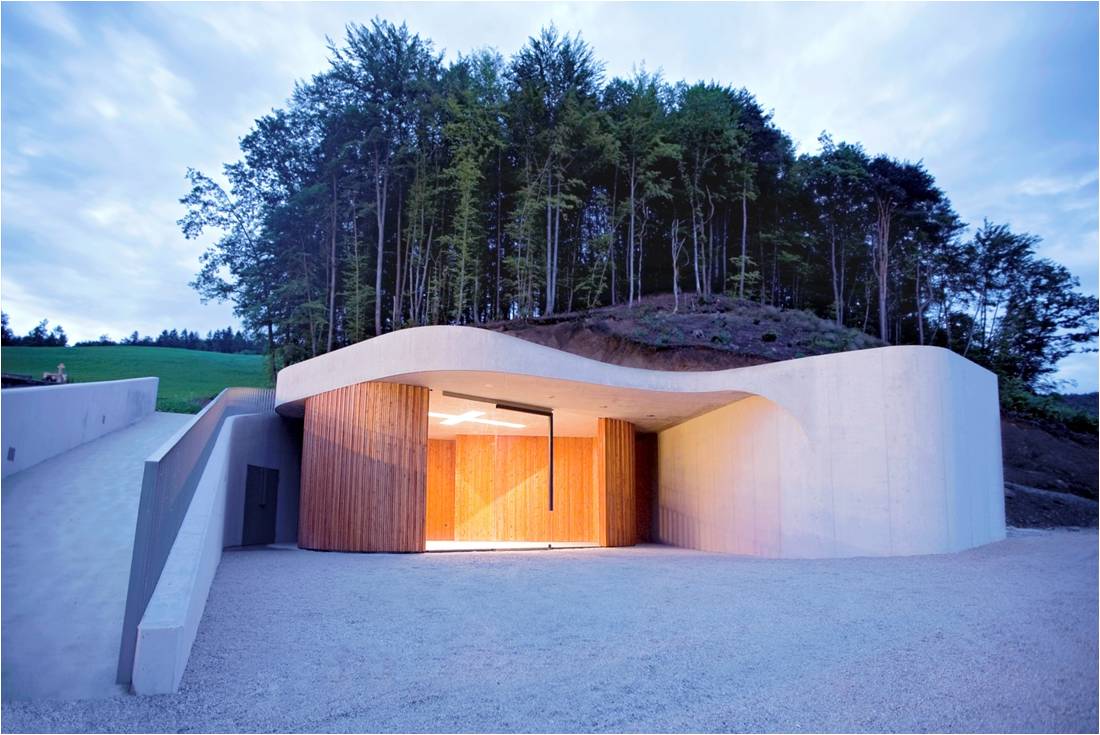 Ljubljana (SLOVENIA), 18 March 1971 OFIS arhitekti is an architectural practice established in 1996 by Rok Oman (1970) and Špela Videčnik (1971), both graduates from the Ljubljana School of Architecture (graduated October 1998) and London’s Architectural Association (MA January 2000). Since its creation, the practice has received several prestigious awards and has been invited to the Architecture Biennial in Venice and Beijing. OFIS works and communicates at an international level, taking part in competitions and architectural lectures all over the world. Recently, the practice successfully completed the construction of a student residence of 185 housing units in Paris, after winning the design competition in 2008. This was followed by its second major international project, the Football Stadium in Belarus, which opened in 2013. The international team is based in Ljubljana, Slovenia, and Paris, France, and has partner firm agreements in London and Moscow. OFIS began its activities in the 1990s, a particularly exciting yet difficult period for the former Yugoslavian republics, which were undergoing intense self-re-evaluation and reinvention from scratch, economically and culturally. In architecture, this meant that most of the larger architectural firms had to be scaled down or went bankrupt, creating an empty space for younger groups or individuals to participate in architectural competitions. OFIS managed to impress competition jurors with original thinking and clear concepts. Over the past fifteen years, they have worked with national and international clients from the private sector, the commercial sector, and state institutions, each with its own set of agendas, budgets and problems. Over this time, they have developed the strategic approach in their work that makes them stand out from the rest.