The 2014 arcVision Prize edition has been presented at Triennale di Milano by Carlo Pesenti, Italcementi CEO, Benedetta Tagliabue,  a member of the arcVision Prize Jury and founding partner with Enric Miralles of the EMBT architectural firm, and Stefano Casciani, arcVision Prize Scientific Director. 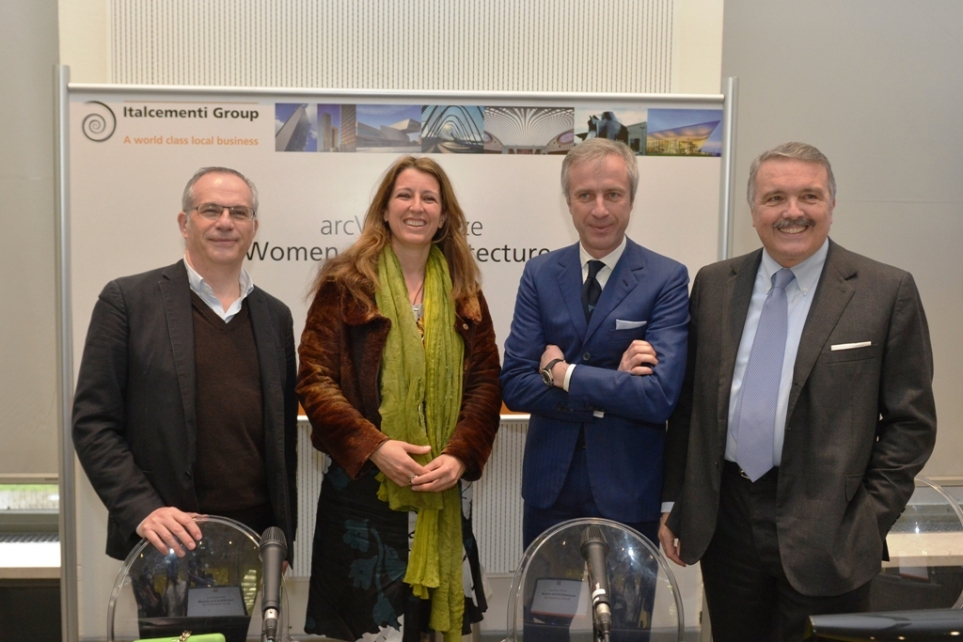 Milan, February 7, 2014 – 23 projects from 16 countries: a vision of contemporary architecture embracing quality, technology, innovation, sustainability and powerful social and cultural values. After the extraordinary success of the first edition, won by Brazilian architect Carla Juaçaba, arcVision Prize – Women and Architecture, the Italcementi Group’s international architecture award, is returning for the second year. The prize recognizes female designers whose work incorporates technological innovation, sustainability and culture in a harmonious combination of function and style. The Prize highlights women’s achievements in contemporary world architecture by focusing on the qualities a modern designer needs for an original approach in developing advanced, non-conventional solutions, and a sharper, more mature sensitivity to the human and social context.

As in 2013, all the members of the Jury will be women, outstanding professionals who have distinguished themselves in promoting a responsible and innovative socio-economic and architectural vision.The members of the Jury selecting the winner of the 2014 prize will be Shaikha Al Maskari (an Abu Dhabi businesswoman and member of the board of the Arab International Women’s Forum-AIWF), Vera Baboun (Mayor of Bethlehem), Odile Decq (owner of the Odile Decq firm in Paris), Louisa Hutton (English founding partner of the Sauerbruch Hutton architectural practice), Suhasini Maniratnam (an Indian actress, producer and writer deeply involved in community service), Samia Nkrumah (born in Ghana, president of the Kwame Nkrumah Pan-African Center), Kazuyo Sejima (owner with Ryue Nishizawa of the SANAA architectural practice in Tokyo), Benedetta Tagliabue (founding partner with Enric Miralles of the EMBT architectural firm in Barcelona), Martha Thorne (born in the USA, director of the Pritzker Prize), Elena Zambon (chairman of the Italian pharmaceuticals company Zambon S.p.A.).

Over the last few weeks, a group of Advisors―architects, academics, critics, representatives from the trade press―selected the candidates for the 2014 prize. The technical-scientific Commission then drew up a short list to be presented to the Jury who will meet in Bergamo from March 5 to 7. The results of the arcVision Prize will be announced by the Jury on March 7, at a press conference at i.lab, the Italcementi Group research & innovation center in Bergamo, and published on March 8, International Women’s Day. Once again this year, the projects and profiles of the shortlisted candidates will be presented in a special edition of arcVision, the magazine published by the Group since 1997 to promote ties between corporate culture and architectural culture.

2014, Italcementi’s 150th anniversary year, is also the centenary of the birth of architect Lina Bo Bardi, an extraordinary designer of stunning buildings in reinforced concrete, whom arcVision Prize will honor with a Special Award. The 2014 arcVision Special Prize for Lina Bo Bardi is a tribute to all the contemporary female designers who have fought and continue to fight for an equal role for women in civil activities and the development of an egalitarian, progressive and engaged design culture. Lina Bo Bardi is recognized internationally as a cult figure in the history of this struggle, through her contribution to the development of an architecture that is profoundly modern in its social implications, structural brilliance and educational vocation.

At the press conference, Italcementi presented arcvision.org, a platform for analysis and reflection on construction and architectural issues, yet another manifestation of the Group’s interest in the creation of an innovation design culture. The portal also offers a new perspective on a long story of experimental work with cement, which began with the formation of the F.lli Pesenti School at Milan Polytechnic in the 1920s and the creation, in the postwar period, of the ISMES institute for experimentation on the static and dynamic behavior of reinforced concrete, and has continued over the years through cooperation with many distinguished names in architecture: Gio Ponti, Pier Luigi Nervi, Frank O. Gehry, Dominique Perrault, Santiago Calatrava, Zaha Hadid, Richard Meier and many others.