26th May 2016 – Open to the public from Saturday May 28th to Sunday November 27th 2016 at the Giardini and the Arsenale, the 15th International Architecture Exhibition, titled REPORTING FROM THE FRONT, will be directed byAlejandro Aravena and organized by La Biennale di Venezia chaired by Paolo Baratta. 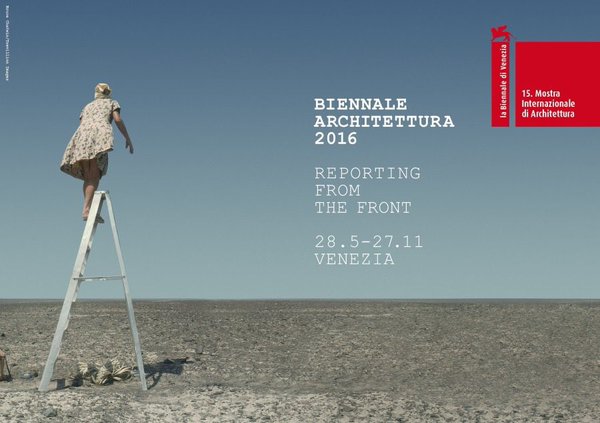 The preview taked place on May 26th and 27th, the awards ceremony and inauguration will be held on Saturday May 28th 2016.

The Exhibition will also include 63 National Participationsin the historic Pavilions at the Giardini, at the Arsenale and in the historic city centre of Venice. Four countries will be participating for the first time: Philippines, Nigeria, Seychelles and Yemen.

The Exhibition REPORTING FROM THE FRONT will be laid out in a unitary exhibition sequence from the Central Pavilion (Giardini) to the Arsenale, and will include 88 participants from 37 different countries. 50 of them will be participating for the first time, and 33 architects are under the age of 40.

“The lady on the ladder who, climbing up onto the highest steps can gaze over a far broader horizon, and by doing so conquers an “expanded eye”, announces the Biennale Architettura 2016 curated by Alejandro Aravena. We immediately loved this picture – stated President Paolo Baratta – because in a way it represents la Biennale as a whole, with our attitudes and our goals.

“What does the lady see? I think – commented Baratta -mainly desolated land comprising immense swathes of human habitation which no human could be proud of; great disappointments representing a sad, infinite number of missed opportunities for humanity’s ability to act intelligently. Much of this is tragic, much is banal, and it seems to mark the end of architecture. But she also sees signs of creativity and hope, and she sees them in the here-and-now, not in some uncertain aspirational, ideological future.”

“We believe  – explained Aravena – that the advancement of architecture is not a goal in itself but a way to improve people’s quality of life. Given that life ranges from very basic physical needs to the most intangible dimensions of the human condition, consequently, improving the quality of the built environment is an endeavour that has to tackle many fronts: from guaranteeing very concrete, down-to-earth living standards to interpreting and fulfilling human desires, from respecting the single individual to taking care of the common good, from efficiently hosting daily activities to expanding the frontiers of civilization.“

“REPORTING FROM THE FRONT will be about sharing with a broader audience, the work of people who are scrutinizing the horizon looking for new fields of action, facing issues like segregation, inequalities, peripheries, access to sanitation, natural disasters, housing shortage, migration, informality, crime, traffic, waste, pollution and theparticipation of communities. And simultaneously it will be about presenting examples where different dimensions are synthesized, integrating the pragmatic with the existential, pertinence and boldness, creativity and common sense.”