Community: Italy. Architecture, city and landscape from the postwar period to 2000

The Italcementi established collaboration with Triennale di Milano is part of a cultural project focused on architecture conceived as a tool for sustainable transformation of the territory. 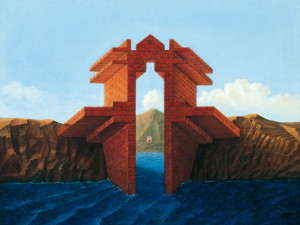 Among many initiatives, the exhibition Community: Italy. Architecture, city and landscape from the postwar period to 2000 from November 28, 2015 to March 6, 2016 will present the story of Italian architecture of the late Twentieth century.

The exhibition tells the story of Italian architecture of the late Twentieth century as a whole, a story whose temporal proximity, along with other factors, had prevented a broader and more general treatise until now.

The main body of the exhibition, which develops along the large curve on the ground floor of the Palazzo dell’Arte, consists of approximately 120 works, including models, original drawings and albums illustrating projects’. From Ludovico Quaroni, Ignazio Gardella and Aldo Rossi to Renzo Piano, works by the biggest names of Italian architecture since the postwar period to the year 2000 are featured, but less celebrated yet equally important works, from Guglielmo Mozzoni, Paolo Soleri and Arturo Mezzedimi are also presented.

The exhibition discusses the deep ties that Italian architecture has had with territorial issues and other disciplines, testimony to a rich, complex and unique story that in some periods strongly influenced the architectural culture of other parts of the world.

The first section is divided into rooms dedicated to specific themes. The layout of each of these rooms was given to different curators: the evolution of the work site to Carmen Andriani, design to Silvana Annicchiarico, archives to Chiara Baglione, architecture schools to Fernanda De Maio, cultural institutions to Paola Nicolin and the architectural publishing to Raffaella Poletti. Each room conveys the subject matter in various forms, putting it in close connection with the Italian situation.

From here the actual exhibition starts, introduced by a gallery devoted to drawings in which some of the most representative graphic and pictorial works of the time are located, such as the “analogous cities” of Aldo Rossi and Arduino Cantafora.

While drawings serve as an autonomous expression that accompanies the entire exhibition, the central part features a kind of urban landscape consisting of models of buildings and neighborhoods, reflecting – among other things – yet another special feature of the Italian architectural scene post World War II: the development of the great art of modeling, which had excellent artists like Giovanni Sacchi. The backdrop for the models are reliefs of the largest Italian cities, designed in a period when special attention was paid to the cities’ morphological characteristics. In this section, selected projects are illustrated with the help of albums that the public is able to browse.

Another important relationship was developed by Italian architecture with landscape photography. As such, one section of the exhibition is devoted to the images of some of the best Italian photographers (from Gabriele Basilico to Luigi Ghirri), whose works – especially between the 60s and 90s – have often crossed and influenced that of architects.

Finally the exhibition refers to the transformation of the physical body of Italy at present. This is done through the presentation of results, as reprocessed by Gianni Canova and the IULM in the form of a video wall, of the “Call Italy in a Frame”, which focuses on the current status of the Italian landscape. This installation is accompanied by a selection of videos titled Future Signals which illustrate how projects’ characteristics are gradually changing in contemporary Italy, as well as how new fields of application and training needs for future architects are emerging.