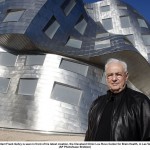 Frank Owen Gehry (Toronto, Ontario, February 28, 1929 ) is one of the most innovative architects on the international scene.

In 1947 he moved with his family to Los Angeles and in 1954 graduated in Architecture at the University of Southern California. In the following years, he worked for various architectural firms, in particular with Victor Gruen Associates and Pereira and Luckman Associates.

After studying Urban Planning at Harvard University’s Graduate School of Design and after a year’s stay in Paris working for André Remondet, Gehry returned to California. In 1962 he he established his own company in Santa Monica. His first projects reflect the modernist language of Harwell Hamilton Harris, Richard Neutra and Frank Lloyd Wright. His autonomous architectural language began to reveal itself with his first residential projects where he explored the expressive potential of poor materials and semi-industrial raw materials. Later, he also began to take care of equipment, interior, industrial design as well as office buildings. The Pritzker Architecture Prize award, in 1989, made him one of the most prestigious architects of contemporary architecture.

The following years were among the most productive and rewarding of his career. The introduction, in the early nineties, of sophisticated software programs facilitated the design of complex building systems faithfully translating the visionary component of his architectural philosophy . His projects express a unique language reflecting both the urban vernacular and the long-standing collaboration with contemporary artists.

Among the major interpreters of Deconstructivism, Gehry is the author of a work of architecture characterized by volumetric units assembled in a process of decomposition/recomposition with a seemingly random pattern. The built structures result from the author’s sensitivity to the suggestions generated by the language of contemporary art and are the metaphorical expression of the complexity of urban space. The use of special software for aerospace industry allowed him to develop particularly ambitious structures, experimenting daring solutions once unthinkable and thus creating extraordinary vivacious works of architecture, like the Guggenheim Museum in Bilbao (1997) which highlighted the image of the Spanish city at an international level .

Among his most significant works is the Walt Disney Concert Hall in Los Angeles (2003), dedicated to the Los Angeles Philharmonic . The complex is located in the orthogonal grid of the American metropolis, breaking its regularity through entries placed on the four corners, rather than on the main axes of the plot, thus generating a composition of independent volumes for both functional destination and static solution. A further confirmation that Gehry’s poetry is always beyond the patterns of rationalist orthodoxy. Gehry Partners LLP currently supports a large staff of specialists in the development of construction systems for complex architectural projects.