The ability to give shape not just to forms, but to ideas, cultural profiles, and of course to their respective imaginations are the qualities that fuel the architects Eva Castro, from Argentina, and Ulla Hell, from Italy. 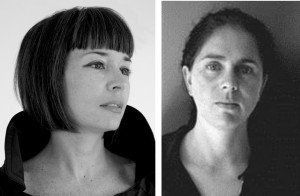 This takes shape in the multifaceted activities of their studio, not surprisingly called Plasma, which combines Eva Castro’s large-scale management and close study of the city/landscape relationship and of urbanization processes with Ulla Hell’s expertise in managing the small scale, the relationship with materials, and the translation of local architectural languages. The codes of their architecture, made from multifaceted and mineral forms, extend through functional latitudes and destinations, from the small residential building in Sesto Pusteria (2012) to the renovation of a large area of Xi’an, China for the International Horticultural Expo (2011). www.plasmastudio.com

“Folding space into space, we draw landscapes into buildings, streets into façades, from the inside out. Our transformative tectonics set spaces, planes and bodies into unexpected relationships that challenge conventional topographies and spatial codes: an architecture of trajectory and momentum, which responds to the specificities of the local context and the possibilities of engagement. The term πλάσμα plasma comes from ancient Greek, meaning ‘that which is formed or moulded’ as well as ‘imagination, fiction’. In physics, the plasma state– or fourth state of matter– describes a unique condition of matter arising at a complex overlay of external forces. Plasma, a charged field of particles, conducts energy. From Beijing, Hong Kong, London and Bolzano, we engage the local with the global while fostering synergies by working in different scales, from furniture and installations to a wide range of buildings, urbanism and master planning. A critical design-led structure and comprehensive approach address the limits of discrete conditions, conventional topographies and spatial codes; the need for conductivity and complexity gives rise to transformative tectonics and new relationships that respond directly to the specificities of the local context. We are exploring how architecture can act as a link between global, regional, urban and environmental systems and forces on the one hand, and the sphere of subjective, individual corporeal experience on the other. How it can render infinite pragmatic and poetic structures visible and by extension evoke a more active, participatory environment.”

The building is located on a hillside in the Dolomites, at the edge of a residential area. The volume was determined in part by the functional elements required to host six independent apartments with a communal circulation core. A formal incision marks the main access and the division of the units, splitting the main volume into two halves. Apart from its functional connotations, this incision becomes the defining element of the building. From either side of the cut, a strip unfolds to form the balustrade of a generous covered balcony that merges with the surrounding topography. Following the steep natural hillside with each floor the strips and the façade jump back. The building has 6 spacious apartments all facing the sun and the panoramic view of the Dolomites. Each unit enjoys maximum privacy thanks to the division of the building volume into two parts, and through the stepped balustrades, which block the view of the terrace spaces from the unit above and from passers-by. The internal living area in each apartment is extended into a covered sun- and view- facing terrace, which terminates in a small private garden. Local larch wood defines the internal and external living areas. Floor to ceiling glazing enhances the view and solar exposure. External sunshades and overhangs from the balconies above minimize overheating in summer. The communal circulation core -a continuation of the formal incision- is very compact and repeats the use of local larch wood and the color code of the façade. 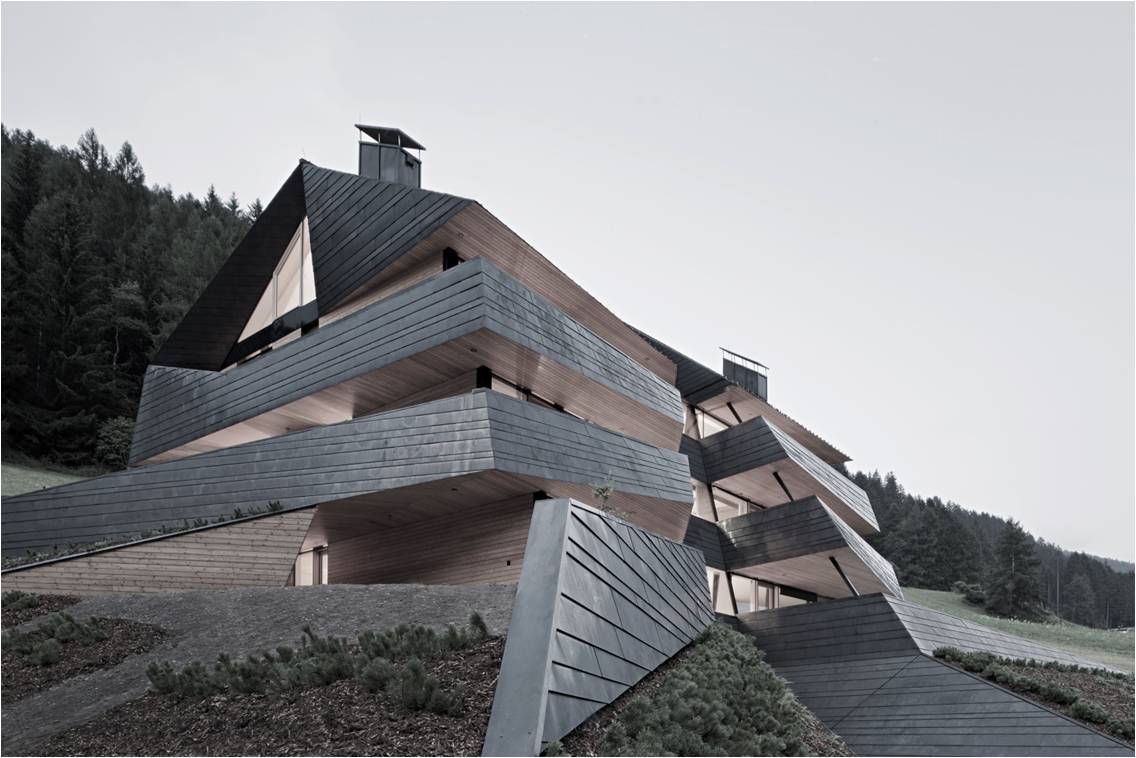 The Sunken Ground concept aims to create an experience that is both intimate and intense, combined with a strong feeling of harmony with the environment and inner contemplation. Sunken Ground looks at concepts in the Shouzou garden tradition, such as the rock, the outcrop and the western equivalent of the grotto, then travels in space and time to the image of hanging gardens and from there to the concept of a sunken courtyard. The result is a combination of intense distortions of the ground and an acute sense of three dimensions: enveloped in concrete, steel and vegetation, the visitor is free to explore a denser version of a microcosm in a series of pocket landscapes offering the opportunity for reflection, relaxation and ultimate playfulness.

SPATIAL CONCEPT: CANYON ARCHITECTURES AND CORRIDORS Given that the site has a strong linear character, the first design task was the creation of two corridors parallel to the main axis. The longer corridor takes the user through a powerful experience of being surrounded by concrete, corten steel, and ultimately immersed in a dense canopy of vegetation. The canyon effect is achieved with oversized pots which demarcate the path and act as micro gardens or pocket landscapes, which can be either entered or observed from outside. The second corridor, which stems from the first one, moves from the feeling of being under the landscape to the feeling of being on top of it. This is achieved with a gentle slope, which places the spectator in a slightly higher position, while the pot is lowered slightly. The combined effect reverses the effect of the main axis so that the hanging gardens give way to a sunken garden east of the corridor. Both corridors are linked through a series of landscape terraces in different materials, generating a diversity that ultimately ensures a variety of experiences. 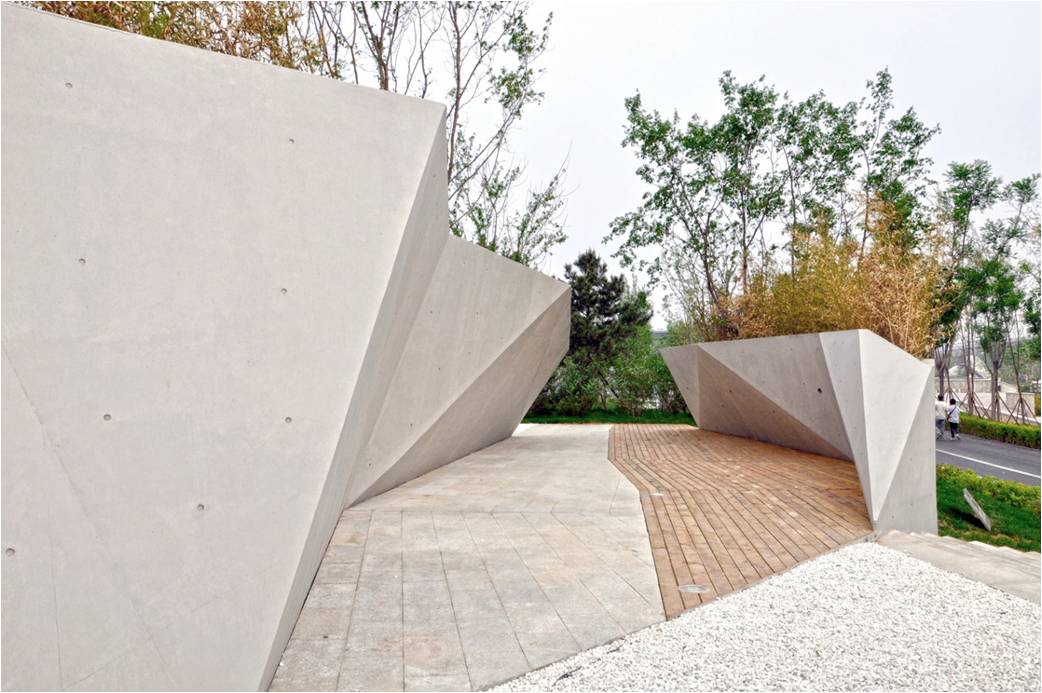 The Mobility Center (part of the Master Plan) will combine a new train station with a bus station, a bicycle depot and a car park in close proximity to the town’s pedestrianized center. Moving the train station to a new position close to the center and reducing the amount of rail track creates many new opportunities for the town’s urban connectivity and development. The Mobility Center consists of a new public plaza and natural underpass beneath the railway line for pedestrian and bike traffic. Motorized vehicles can be parked on the northern side, with a short walk to the town center. The center provides connections between train, bus, car and bike traffic. Using a topographical approach, our proposal sees the center as part of the ground with a large public plaza flowing smoothly down and below the railway line and forming a new pedestrian and bike link with the northern part of the town. The plaza is thus a nodal link between the town center, the northern and western parts of the town and, through the multiple transportation links, to the many outlying villages and further afield. It also integrates the surrounding streets and two listed buildings into an expansive yet cohesive landscape. The relatively new concept of ‘shared space‘ – whereby all traffic participants have equal rights and negotiate intuitively – requires careful differentiation of the surface to create different zones and clear patterns of movement. This is supported by specific integrated street furniture and lighting strategies. Most of the plaza is formed by small elongated granite blocks with seating as unfolded elements in black steel and timber. 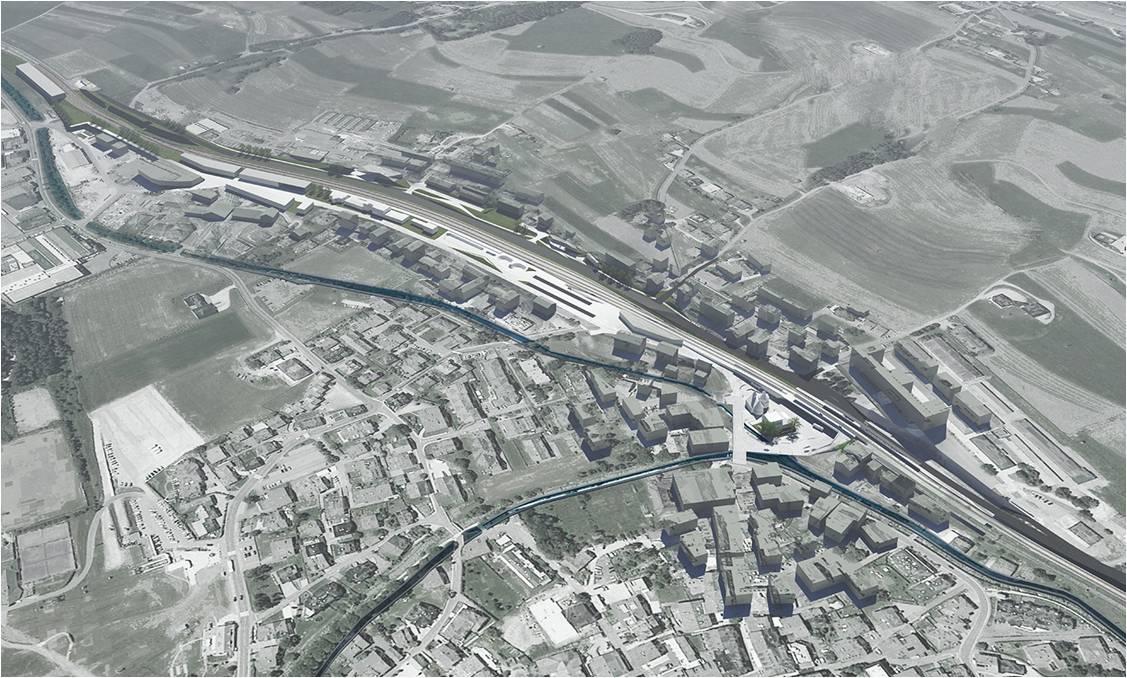 The International Horticultural Expo was instigator and core for the redevelopment of a large area between the airport and the ancient city center of Xi’an, the home of the Terracotta Army and a business center in China’s vast interior. Together with GroundLab, we won this invited international competition with a radical self-sustainable vision for the future: Flowing Gardens merges water, planting, circulation and architecture into one seamless system. The proposal consists of a 5000 sq.m Exhibition Hall (Creative Pavilion), a 4000 sq.m Greenhouse and a 3500 sq.m Gate Building, in a 37 ha landscape that houses the International Horticultural Expo and a legacy park for Xi’an City. Flowing Gardens presents many sinuous paths, creating a network of intermingling circulation, landscape and water. The topography and slopes were used to create paths similar to roads winding round a mountain, negotiating steepness with gradients. The paths vary in width, ranging from main walkways and arteries to towpaths. The spaces between them become zones for various types of plant and wetland areas, for easy maintenance. The three projected buildings, located at the intersections of the main pathways, are developed as nodal points of intensification of the landscape. 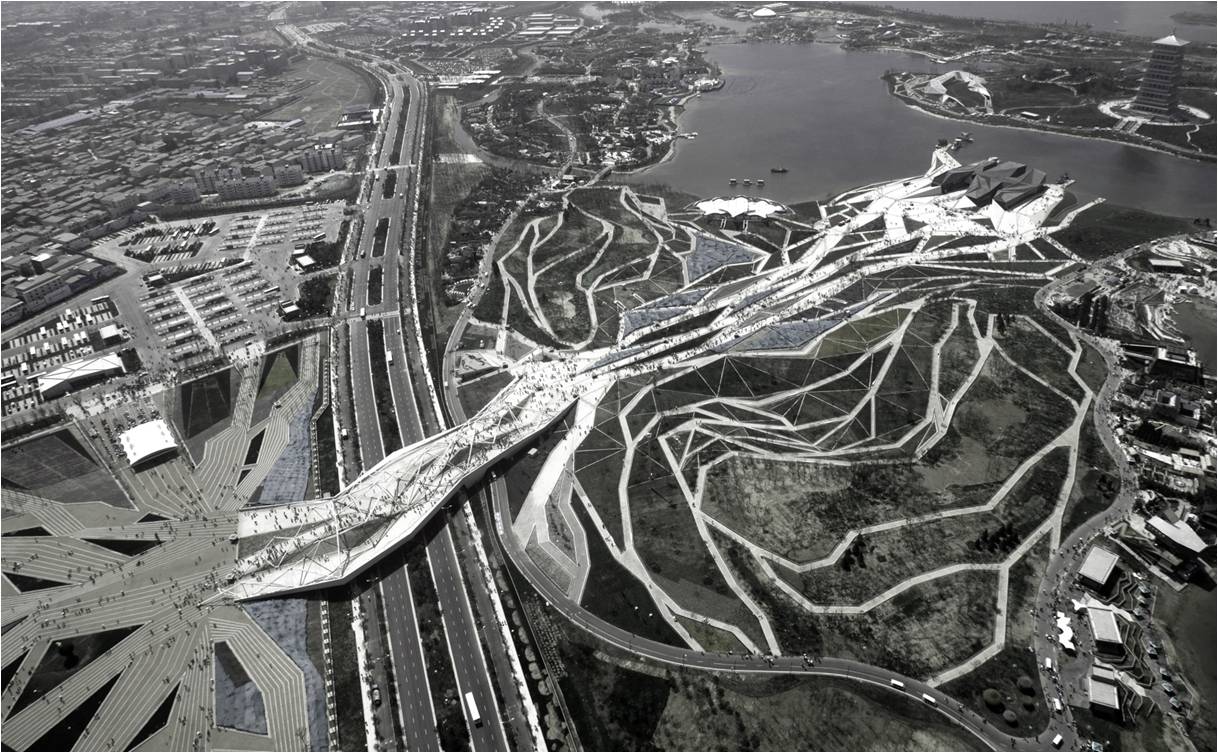 Eva Castro is the director of the Landscape Urbanism Unit at Tsinghua University in Beijing and a visiting professor at the Architectural Association in London, where she has been teaching as a diploma unit master and co-director of the Landscape Urbanism Master program since 2003. Castro is cofounder of Plasma Studio and GroundLab. She has been recognized with several awards including the Next Generation Architects Award, the Young Architect of the Year Award and the Contract World Award.

Ulla Hell joined Plasma Studio in 2001 and has been the director of Plasma Studio in Italy since 2003. As head of the studio in the Italian Alps, her focus is on responding to the specificities of the local context by mediating it with a global scope and outlook. Her research and building work concentrates on developing new strategies for typologies and building techniques within very local conditions. Castro and Hell have benefited from a symbiotic relationship developed from within the characteristics of their local environments; from Eva’s academic research into urbanization processes in Landscape Urbanism and its application in large-scale projects in China, to Ulla’s ‘artisan‘ scale on new fine-tuned interventions within the delicate environment of the Italian Alps. Their dialogue has ensured that their projects, regardless of their scale and location, benefit from their dual perception, establishing a delicate work ecology. Their work has been published and exhibited worldwide, including Archilab’s ‘Naturalizing Architecture’ and various solo exhibitions and art installations at the DAZ (Deutsches Architektur Museum) in Germany and the Architectural Association in London. Plasma Studio and GroundLab were the lead designers for the International Horticultural Fair in Xi’an, China, a 37ha landscape with a wide range of buildings, which opened in 2011.