arcVision 32 – The machine and us

arcVision 32 – The machine and us. Stories from the future of technological civilization. Intellectual work and cognitive processes replaced by increasingly sophisticated computerized systems, or cooperative work and competence sharing, where the best of robotic intelligence joins forces with the best of human intelligence? 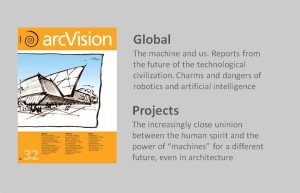 Is there still hope for man?

The most frequent criticism of IQ tests is that they assess only some of our mental faculties, such as abstract reasoning and logic, speed at learning, powers of memory, but not our problem-solving abilities, or the ability to assess and react to variable external circumstances. According to US psychologist Howard Gardner’s theory of multiple intelligences, man has nine intelligences, relating to different parts of the brain, which are independent of one another: linguistic, mathematical/logical, spatial, bodily-kinesthetic, musical, interpersonal, intrapersonal, naturalist, existentialist or theoretical. The problem is how to quantify these intelligences. How do we measure our predisposition to relate to other people or our ability to reflect on existence and the universe? The enormous strides in neuroscience and the neurological localization of our various mental functions are bringing in a new vision of man. Brain imaging techniques show increasingly clearly that what we think and feel has an essentially material nature and is the result of complex cerebral activities. This could almost be a return to Aristotelian naturalism, which rejects any dualism between matter and spiritual substance and relates every human thought and emotion to a particular state of the body. The theories that see an identity of the brain, mind and conscience as stemming from a simple physical state seem to provide fertile ground for artificial intelligence studies and scientific hypotheses that consider mind uploading from a biological substance such as the brain to a computer system as a future possibility. According to many futurologists, one day computers will be able to execute a detailed scan and mapping of brain functions for a perfect simulation of the human brain. Despite heated debate and the sceptics in the science and philosophy communities, technological mind uploading remains an intriguing “threat”… humanoid robots with feelings and emotions, supported by three-dimensional anatomical models that simulate the body!

But, might it not be more useful if we limited ourselves to building sophisticated intelligent machines that replicate or improve on our logicalmathematical cognitive processes, thus simplifying and improving our quality of life? Also, are we sure that it makes sense to reproduce the human being if “three quarters of the sicknesses of intelligent people”, as Marcel Proust says, “come from their intelligence?”