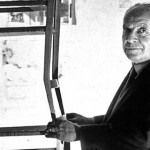 His first projects were in line with the “neo-classical” trend emerged in Milan in the in the early 1920s. These were years in which Ponti’s architecture was affected by the Viennese Secession, opposed the Rationalism of the Group 7, was influenced by the imaginary of Classicism and was broadly in line with the Twentieth Century Movement. His wide-ranging activity developed into the direction of the publishing business, and in 1928 , he founded the Domus magazine (which he edited from 1928 to 1940 and from 1948 to 1979). Between the Twenties and Thirties, he published the book La casa italiana, scritti teorici sull’arredamento e l’architettura (The Italian house, theoretical writings on furniture and architecture). He participated in numerous international Applied Arts and architecture exhibitions. In the Twenties, his many interests in the field of Applied Arts led him into the world of ceramic production as artistic director and main designer of Richard-Ginori ceramics factory, where he redesigned the company’s production strategy. With the ceramics designed for Richard-Ginori, he won the “Gran Prix” in the Paris Exhibition of 1925.

At the Biennial Exhibition of the Decorative Arts in Monza in 1927, he presented, alongside Richard-Ginori ceramics, two installation: elite furniture and objects for the “Il Labirinto” (the Labyrinth) group of architects, and the Domus Nova middle-class furniture for La Rinascente department stores. In the thirties, the activity of Ponti turned to the organization of cultural events and he became the director of the V Triennale of Milan in 1933. In those years, he devoted to other fields than architecture: he designed the sets and costumes for costumes the Teatro alla Scala in Milan and he was a professor in the department of architecture at the Polytechnic in Milan from 1936 to 1961. The city of Milan boasts many of Ponti’s projects: the Rasini Tower, overlooking the Public Gardens of Corso Venezia, the Ferrania Palace in Via De Togni, the RAI headquarters in Corso Sempione and the Littorio Tower in Parco Sempione.

His activity also included: industrial design with the project for the chair “Superleggera” produced by Cassina; lighting; nautical furnishing of the transatlantic liners Andrea Doria, Conte Great and Julius Caesar, sanitary appliances for Ideal Standard and the so-called “Typical Solutions” such as the innovative “Furnished Window”, in 1954. He also worked in niche field like the Car Design with the “Diamante” (Diamond) car, which was so called because ot its multi-faceted body. In the Fifties, his style became more innovative and, while remaining classical in the design of the second Montecatini office building (1951), is fully expressed in the Pirelli skyscraper, which is considered his most important work. The architect’s activity spread both in Europe and non-European countries including: Hong Kong, Denver, Baghdad, Caracas, Sao Paulo and New York.