Regenerating cities and the territory, beginning with the suburbs. 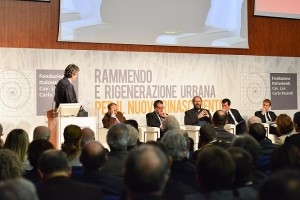 Regenerating cities and the territory, beginning with the suburbs: Renzo Piano’s manifesto proposes a new Renaissance.

From examples of cities that have achieved successful regeneration to a reflection on the vital role of innovation in materials and technologies for a new renaissance. A host of interesting ideas from the Italcementi Foundation congress, with Italy’s Minister for Infrastructure & Transport, Maurizio Lupi, concluding the proceedings.

“Mending and urban regeneration, for a new Renaissance”. The manifesto of Renzo Piano provided the starting point and theme for the annual congress of the Italcementi Foundation.

«Our cities and territory need major redevelopment projects,» explained Italcementi chairman Giampiero Pesenti, who opened the congress. «Redevelopment that improves urban conditions and the lives of residents, especially in suburbs. Today, we need a range of bold initiatives to recover vast areas of unused or poorly used land, and trigger a virtuous circle to replace buildings that no longer meet acceptable standards of structural safety, energy efficiency, and architectural, urban and social habitability. We have to transform old, degraded residential areas into districts that are more sustainable, more attractive, more habitable, contributing to the economic and social revival of entire cities. Today, innovation in materials and technologies provides us with previously unimaginable solutions, and it is up to us to ensure that everyone benefits from these advances, including, and perhaps above all, people living in our most neglected areas.»

«This issue has deep social implications,» observed Italcementi CEO Carlo Pesenti. «It concerns the quality of people’s lives, safeguards for our territory, and economic growth. Let’s be clear: value creation is the necessary precondition to enable corporate wealth to be shared. This is an operation where collective interests interweave with corporate interests, for a social and economic Renaissance. Nevertheless, it can only be achieved through a great political-institutional vision fostering sustainable innovation in products and processes.»

These were the core considerations at the annual congress of the Italcementi Foundation, which once again brought together some of the top names in Italian culture to discuss and develop the vision needed to trigger a new Renaissance capable of redeveloping the country’s urban fabric, involving social classes currently in conflict with the urbanization process.

Architect Renzo Piano, made a life senator for his contribution to architecture, has produced a video manifesto – previewed at the congress – on the concept of mending and urban regeneration, in other words projects in the suburbs that involve local residents. The manifesto is a consequence of Renzo Piano’s decision to devolve his parliamentary salary as funding for workgroups set up to study a number of Italian suburbs, where each study is led by a “tutor” – a student or colleague of Piano. Together, the tutors form the G124 workgroup, which takes its name from the number of Piano’s senatorial office in Palazzo Giustiniani, which he has converted into a laboratory for the redevelopment of Italian suburbs (http://renzopianog124.com).

The issue posed by the “mend and regenerate manifesto” is also the core issue of the University of Bergamo’s RIFO project promoted by Italcementi and coordinated by Prof. Emanuela Casti. Prof. Casti explains in a video the procedure used to identify abandoned areas that could be redeveloped for “urban regeneration” in various cities in the region of Lombardy. Under the strategy, tenements that are no longer safe or sustainable in environmental, architectural and urban terms will be demolished and replaced with buildings constructed with new materials and technologies.

The theme was taken up several times during the round table moderated by journalist Walter Mariotti. Mario Cucinella, an architect who has always been interested in sustainability and urban recovery issues from a “place for people” viewpoint, and founder of the “Building Green Future” no-profit organization, described his “field” experience in mending suburbs. Cucinella is one of the “tutors” on the G124 project and his workgroup was active in Catania, specifically in the district of Librino. «At times, all it takes to improve life in a suburb is a new library, well-tended gardens, a pedestrian footpath from a school to a gym,» he said. «Not top-down intervention by “star” architects, but solutions that improve daily life and encourage people to meet.»

Philosopher Silvano Petrosino, an associate professor at the Catholic University and one of the leading representatives from the world of culture and philosophy, who emphasizes “culture as an element of community”, took location and housing as his theme. Petrosino explained that it was «impossible for man to not live, in other words, to take care of places and ensure good management. A law that has been overturned and needs to be restored to pave the way for the new Renaissance.»

Geminello Alvi, a writer and economist accustomed to controversy, proposed an original analysis of the city question and the need for functions and forms that establish concrete communities. Alvi compared the new Renaissance with the original in terms of demographic scenarios and launched a hypothesis for the spiritual and political regeneration of Italy, imagining a confederal future for the country run by a minimal liberist state.

The debate went on to look at the creation of economic value associated with mend and urban regeneration initiatives, with a contribution from Francesco Daveri, an economist and leader writer for Il Corriere della Sera. Daveri analyzed two cases: the first was an experience in Harlem, the New York district where the move from a situation of buildings rented to groups traditionally in transition (students or immigrants) to a policy favoring home ownership has also fostered a growing sense of belonging, enabling regeneration. The second case was a recommendation for a system of incentives to encourage top professionals to leave city centers and move into the suburbs.

Aldo Mazzocco, CEO of Beni Stabili SIIQ SpA, presented a concrete business case. Describing the evolution that saw, first, the redevelopment of old city centers and now the regeneration of degraded districts, Mazzocco detailed the “urban restyling” of the two skyscrapers in Milan’s Porta Garibaldi district, where the key focus was on energy saving, technological innovation and adaptation of the two buildings to comply with the new safety regulations. Mazzocco, who became president of the Assoimmobiliare real estate association in 2011, also presented the forthcoming opening of the new museum of the Prada foundation in Milan as an example of the redevelopment of an abandoned area. The museum is the result of a project for the conversion of factory buildings dating back to the 1910s.

The mayor of Bergamo, Giorgio Gori, emphasized that the pursuit of new growth prospects in mobility and transport and the redevelopment of abandoned areas and suburbs were core elements in the administration of a medium-size historic Italian city like Bergamo. Bergamo has been chosen as a case study for a joint research project – Bergamo 2.035 – by the University of Bergamo and Harvard University with the support of the Italcementi Foundation.

Bringing the round table to a close, architect Michele Molè, designer of the Italian Pavilion at Expo 2015, illustrated the architectural project for “Palazzo Italia”. He explained the original idea of cohesion, the power of attraction to generate a renewed sense of community and belonging (a key element for any urban re-development project), and then described the actual construction work, which involved extraordinary elements of technological innovation and sustainability, together with the know-how and expertise of the Italian companies involved in the project.

The conclusions of the congress were drawn by the Italian Minister for Infrastructure & Transport, Maurizio Lupi who outlined the political and institutional action of the Government which aims to create the necessary conditions to support the development of the Country. 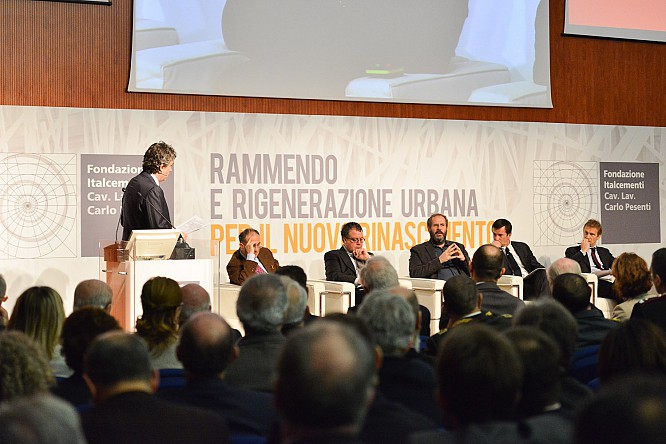