Starting with the dialog between Europe and the United States, which forms the basis of her studio’s activity (Yes Architecture, based in Monaco and New York) Berktold widens her interests to include a broad range of emphases beyond pure architecture. 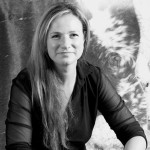 From urban design to interior design, product design, and web design, Yes Architecture’s design practices emphasize its multidisciplinary nature, including the involvement of different groups of artists and designers in an open and dynamic research collaboration. In her transformation project for the former German parliamentary building at Bonn (WCCB – World Conference Center Bonn, 2015) respect for the existing building complex, designed by Günter Behnisch, is accompanied by a pursuit of new spatial fluidity carried out in a complex plan. www.yes-architecture.com

“YES architecture is a Munich-New York-based practice established in New York in early 1994 by the principal Prof. Ruth Berktold. The research and design work of YES includes not only building and city architectural design but also extends into the realms of interior design, furniture, product- and web-design.  The multi-disciplinary nature of this office focuses on the engagement of diverse groups of artists and designers in a fluid and evolving research-based collaborative practice. The positioning of the practice in two cities – Munich (Germany) and New York (US) has enabled the collaboration to pursue divergent yet complimentary research areas through academic appointments, while simultaneously producing speculative building projects and theoretical works in their studio.

Ruth Berktold holds a tenure-track appointment at the University of Applied Sciences in Munich, she also is a founding member of the Climadesign e.V. and works on sustainable building designs. The work of YES continues to develop on several fronts simultaneously. From the publication of theoretical projects and writing, to temporary installations as well as speculative and built architectural and urban-scaled projects, their work examines the possibilities for the use of new computer technologies in design processes and their implications on building materials, assemblies, and environments.”

The WCCB – World Conference Center Bonn was inaugurated on June 7th 2015 by Jürgen Nimptsch, the Mayor of Bonn, Ban Ki-moon, Secretary-General of the United Nations, and Frank-Walter Steinmeier, German Minister of Foreign Affairs. YES Architecture (Prof. Ruth Berktold and DI Marion Wicher) was awarded the first prize in the international architecture competition (155 submissions). The building complex includes the United Nations Conference Center with various conference halls (the largest conference hall accommodates approximately 3,500 guests) and amenities, as well as a hotel with a total gross floor area of 85,000 sqm. The primary aspects of the urban concept are the respectful interaction of the new structure with the existing building complex of the former Bundestag (parliament buildings designed by Günter Behnisch) and the creation of a defined ‘conference-axis’ in the urban space. The former Bundestag and the new conference hall for the German parliament define the main axis of the new conference center. A representative piazza spans between these areas and acts as a forecourt and main entrance to the conference center, accentuated by an expansive crystal-like glass hall connecting all the conference units. The spacious foyer is covered by a columnless glass roof structure. The hall extends northward where it unites with the adjoining park. These three elements ‘forecourt’, ‘glass hall’ and ‘park’ constitute the heart of the new conference center. This central area is surrounded by the conference centers and a first-class hotel. The complex is embedded into the landscape in an unobtrusive way – the roof itself is a folded landscape. The hotel constitutes the only vertical accent in the form of a single high-rise. 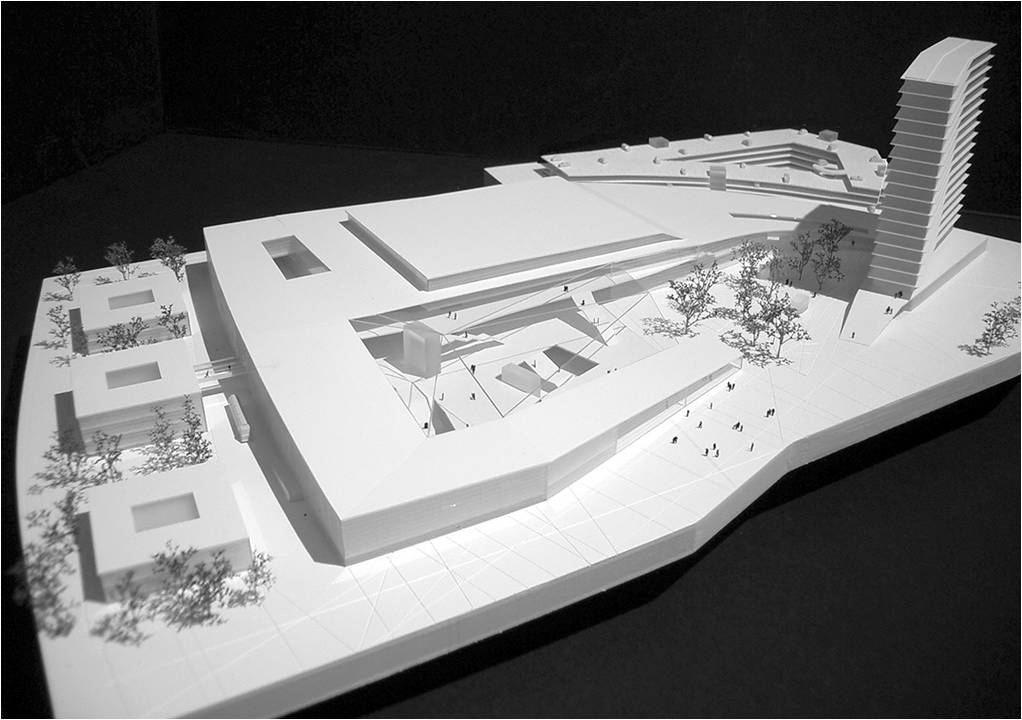 The project’s goal was the creation of an attractive landmark for commercial use in combination with a 125-room hotel. The design incorporates the dynamic movement of the nearby railway with two inclined building “slices” – imitating trains travelling in opposite directions. This strong design choice also provides sound protection for the building’s public space, shops and restaurants as well as the surrounding residential buildings. The shopping mall is located on the ground and first floor and comprises 16 shops, offices and restaurants, for a total area of 33,000 sq.m. The parking facilities (385 parking spaces) are situated on the ground floor and in the basement. The cubature of this low-rise building wing cascades down towards the piazza and market place with a broad staircase, which can also be used as an amphitheater. The closed retail facade facing the piazza is covered with an inclined green roof, thus hiding the otherwise inconspicuous facade and adding greenery to the first-floor terrace. The terrace is accessible to the public, includes an extra entrance into the mall and connects to the hotel’s breakfast and conference rooms. The hotel’s 125 rooms of varying sizes are available in the categories single/double, studio business, superior and apartment. 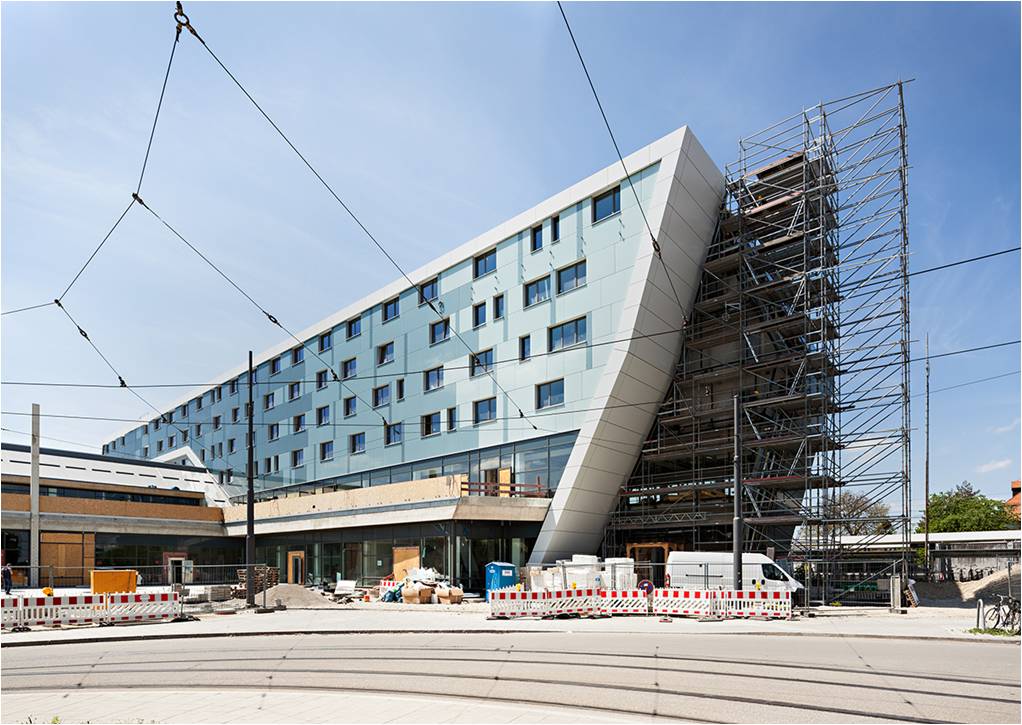 The project’s objective is the development of flexible housing units for refugees based on converted maritime containers, insulated in accordance with EnEV regulations (German Energy Savings Ordinance), modular interiors and varying façade cladding. The pre-selected façade elements include individually implemented wood, plaster and metal panels, resulting in a lively, interesting and versatile outer appearance. Recycled materials are used wherever possible. The interior is modular – customized to the needs of the residents. The prefabricated modules are assembled back-to-back and range from living room modules to various bedrooms configurations, kitchens, bathrooms and dining areas. The modules can be dismantled, transported to a different location and reassembled. The concept’s flexibility ensures the project’s sustainability and optional reuse as student housing, apartments for the elderly, and social housing. The upper floor is accessed via exterior staircases, terraces, walkways and bridges. The basic modules, including 2-person studios, double-container family units for 4 persons and triplex units for 10 inhabitants, are assembled as clusters to form the settlement. Gardens, terraces, balconies, multifunctional community areas, parks, children’s playgrounds, learning centers, visitor areas, prayer rooms and storage units are generated between and around the housing modules. Much emphasis is placed on the identification of the refugees with their new neighborhood and their integration into society. Residents are encouraged to participate in the development and upkeep of their new home, with spaces for urban gardens, a catalogue of predesigned façade options to choose from and easy do-it-yourself furniture kits. The project offers high housing quality whilst staying within a small budget. 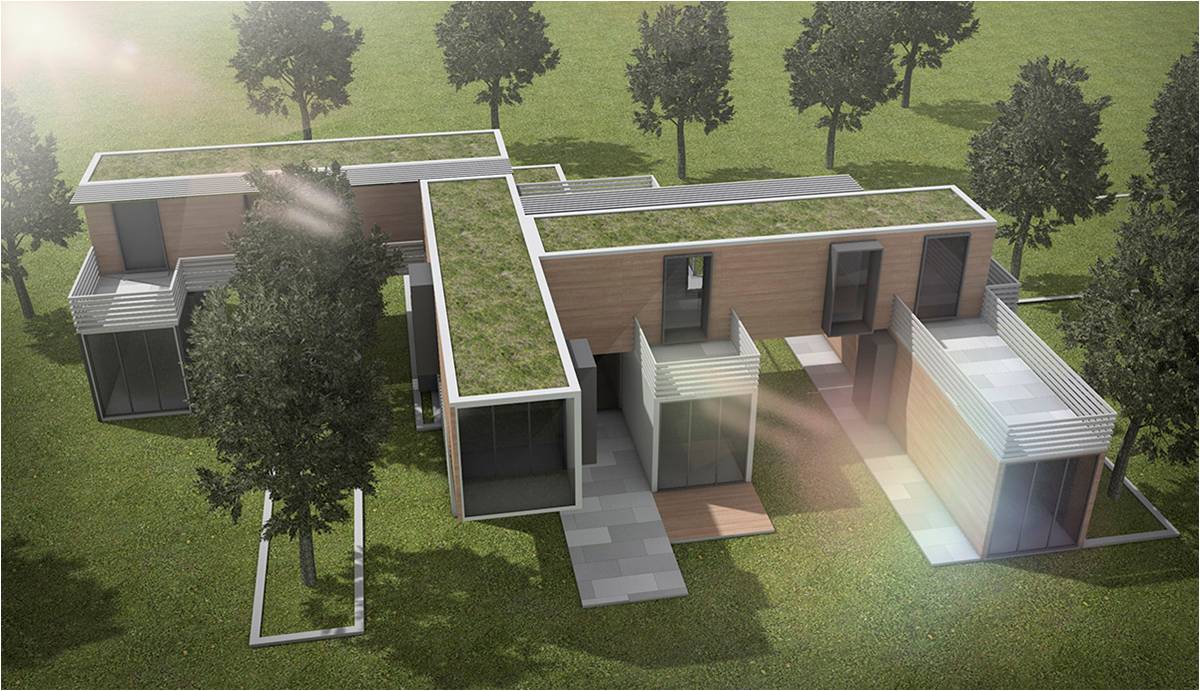 The “Yes-House” is a residential home designed by and for the principal of Yes Architecture on her site in the province of Bavaria, in the Allgäu. The residence is designed as a single continuous surface starting with the pool. guest room, living room and entrance at site level and then slowly lifts itself off the ground to accommodate the kitchen and dining area, study and bedroom. The area under the elevated bedroom, which forms the highest point of the building with views of the surroundings and lake, is used as a natural carport. The interior design is open plan – all areas transition seamlessly increasing the experience of the 3d cubature. The living room opens up onto a terrace with pool and garden. The exterior walls and folded roof sections are also planned as continuous surfaces using the same cladding material – white concrete. The homogenous surface is accentuated by wood panels from local forestries. A private wooden roof terrace with 360 degree views of the area is accessed from the bedroom. The basement comprises a hobby / gues room as well as storage and equipment (HVAC). 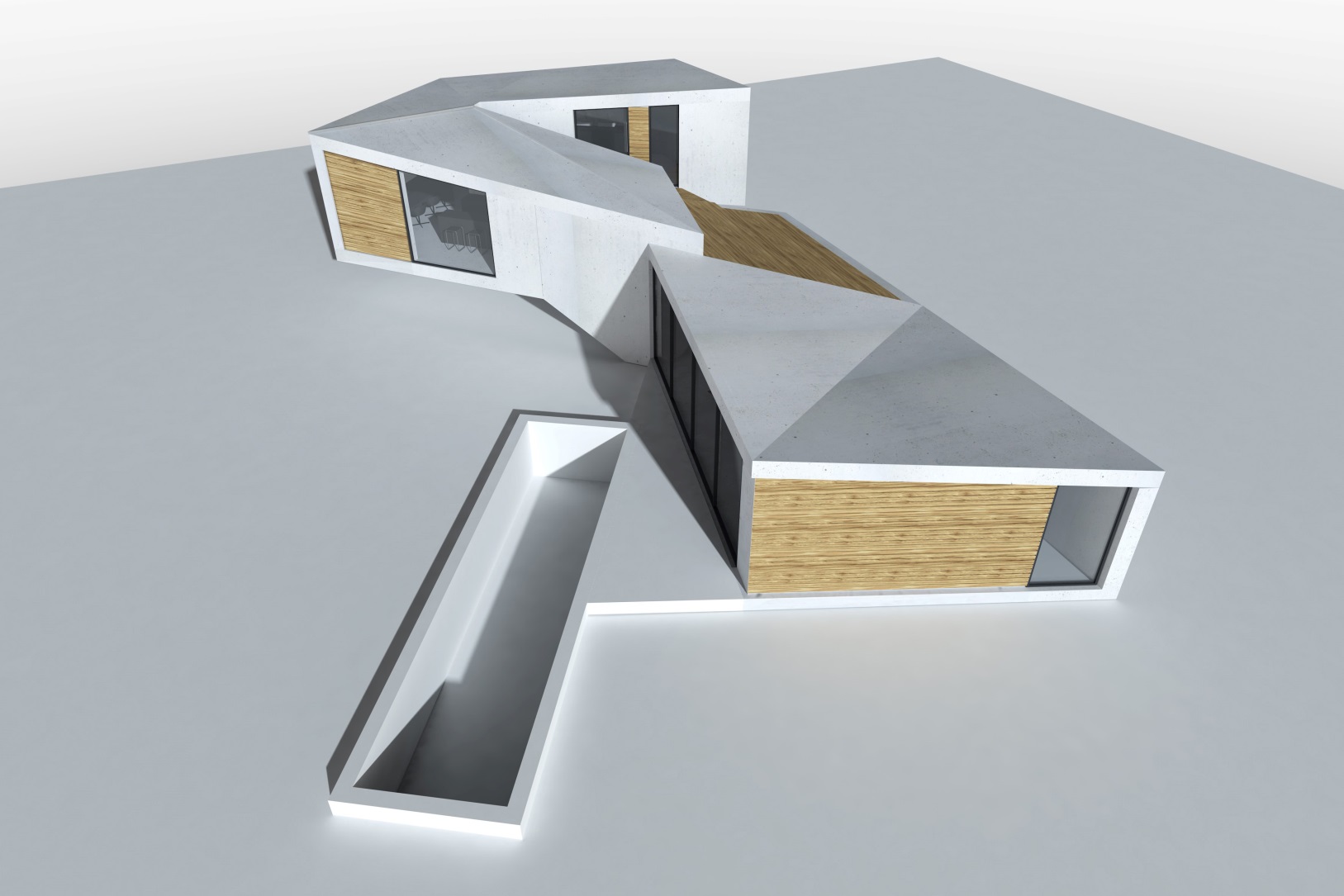 Prof. Ruth Berktold has been teaching at the University of Applied Sciences in Munich since Sept. 2002. Her field of research is Architectural Design and the Conceptual Approach to Computer Integrated Design. She has a Munich-New York-based office called YES architecture. She lived in New York from May 1994 to May 2002. Before starting her own practice, she worked for Behnisch and Partner, Stuttgart, Prof. Eisele und Fritz, Darmstadt, Bernard Tschumi, Jim Polshek and Asymptote, New York, dealing with projects of different scales and designing international competitions for clients such as Daimler Chrysler and BMW. During this time she was a professor of architectural design at RPI graduate school (Rensselaer Polytechnic Institute, NY) and at  Parsons School of Design, NY. She has been an invited member of many juries at different universities as well as for competitions. In 2002, she was a jury member for the Innovationspreis Architektur + Office in Germany and for the most important and prestigious Architecture Award in Austria, the Bauherrenpreis , under the leadership of ‘Hans Hollein’. Since 2002 Ruth has been a member of ‘Architekturbürodeutschland’- a group of 8 distinguished German architects collaborating on large-scale international projects. In December 2004 Ruth and her partner were awarded the commission for the new UN-Campus in Bonn, a 104 mio. Euro structure called IKBB – Internationales Konferenzzentrum Bundeshaus Bonn.