DANIEL LIBESKIND, B.Arch M.A. BDA AIA, as an international architect and designer is committed to expanding the scope of architecture to involve philosophy, art, literature and music. 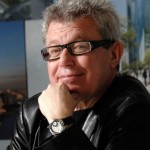 Fundamental to Libeskind’s philosophy is the notion that buildings are crafted with perceptible human energy, and that they address the greater cultural context in which they are built. Daniel Libeskind established his architectural studio in Berlin, Germany in 1989 after winning the competition to build the Jewish Museum in Berlin.

Last year Studio Daniel Libeskind celebrated the completion of the City Life residences, part of the redevelopment of the historic Fiera Milano Fairgrounds in Milan, and Kö- Bogen, an office and retail complex in Düsseldorf. The Studio has several projects under construction including three high-rise residential developments: The L Tower in Toronto, Zlota in Warsaw, and Vitra in Sao Paulo; two projects in Asia, the Zhang ZhiDong and Modern Industrial Museum in Wuhan, China, and Corals at Keppel Bay in Singapore; as well as the Centre des Congrès in Mons, Belgium.