“It’s not about the world of architecture, but the architecture of the world”. To paraphrase the motto of the designer and theorist Bruce Mau in Massive Change, the slogan could well represent the complexity of design research carried out in the last two decades by Marion Weiss, the American architect and cofounder of the studio Weiss/Manfredi. 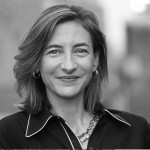 Starting from the keyword “infrastructure,” Weiss explores the relationship between architecture and nature, tracing new limits and investigating unprecedented approaches to the idea of public space. It is a path of research synthesized well in her most recent book, Public Natures: Evolutionary Infrastructures, but also put into place directly through the architectural practice. Among her most significant works in this regard is the Brooklyn Botanic Garden Visitor Center (2012), an organic subterranean fusion between nature, architecture, and infrastructure. www.weissmanfredi.com

“Today, as public and natural realms are continually eroded, I believe the territory of architecture should concern itself with the whole of the built environment. Over the past twenty years my practice and teaching have pioneered the idea that architecture must engage the world of landscape and ecology, and create new social and public infrastructures. If infrastructure has become the byword of so many practices that blur the boundaries between architectural and landscape practice, it is because it encapsulates the challenges of scale and complexity that are the preconditions of meaningful public design work today. Traditional distinctions between these practices overlook the most pressing social and environmental issues of our time. I am drawn to projects that operate outside the ideal of the singular architectural object, and look instead for opportunities to transcend the limits of site and program to invent new territories for public life, where the most compelling projects operate in a hybrid terrain. Our projects are evolving experiments in the creation of a more elastic definition of design–one that connects the loose ends of architecture, ecology, and infrastructure to create new forms of public nature.”

The Women’s Memorial, winner of a national competition, transforms the historic McKim, Mead and White hemicycle retaining wall into a new ceremonial gateway to Arlington National Cemetery. An excavated arc of space between the hemicycle and the cemetery forms the thirty-seven-thousand-square-foot memorial and education center which includes an exhibition gallery, an auditorium, computer register, conference facilities, and Hall of Honor. Four glass-enclosed staircases pierce the historic granite structure and ascend through the interior space of the memorial gallery to an upper terrace. The terrace is defined by a 240-foot diameter arc of glass tablets carved with texts by and about the women who served. Sunlight passing over the inscriptions casts legible shadows onto the marble wall of the gallery. 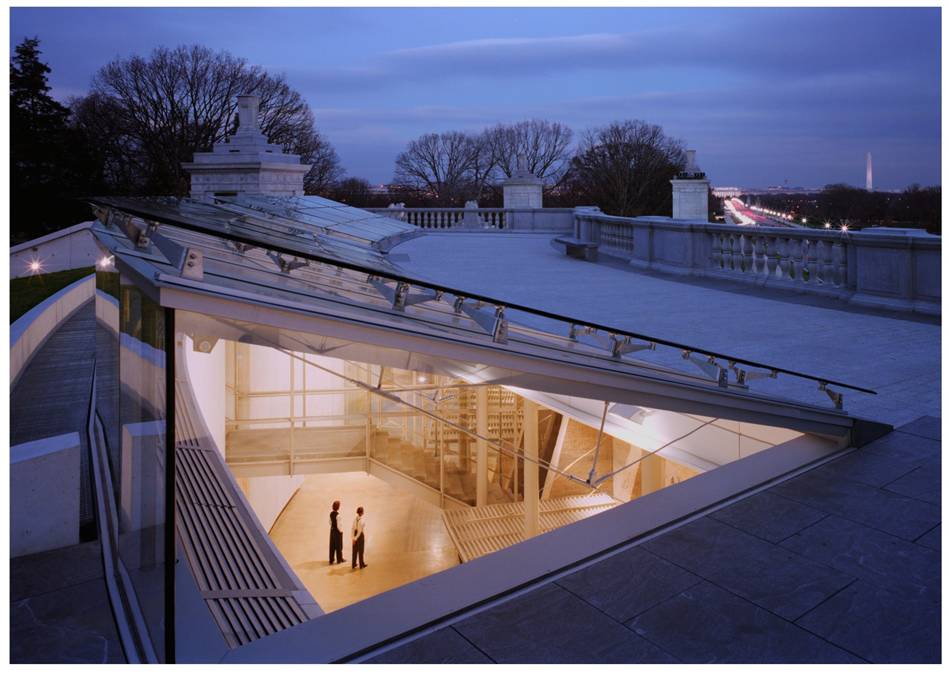 The new Visitor Center for New York City’s Brooklyn Botanic Garden is conceived as an inhabitable topography defining a threshold between the city and the garden. To provoke curiosity and interest in the world-class collection, the new building will provide a legible point of arrival and orientation, an interface between garden and city, culture and cultivation. The design of the Visitor Center is a seamless extension of the landscape. Nested into an existing berm, the Center is experienced as a three dimensional continuation of the garden path system, framing a series of views into and through the garden. The Visitor Center wanders from the city into the garden, includes an orientation room, information lobby, gift shop, exhibition gallery, café, and an events space. The LEED Gold building utilizes the berm’s earth mass and the spectrally selective fritted glass walls to achieve a high-performing building envelope that minimizes heat gain and maximizes natural illumination. A green roof and geothermal system will increase the building’s energy efficiency throughout the year. The Visitor Center redefines the physical and philosophical relationship between visitor and garden, introducing new connections between landscape and structure, exhibition and movement. 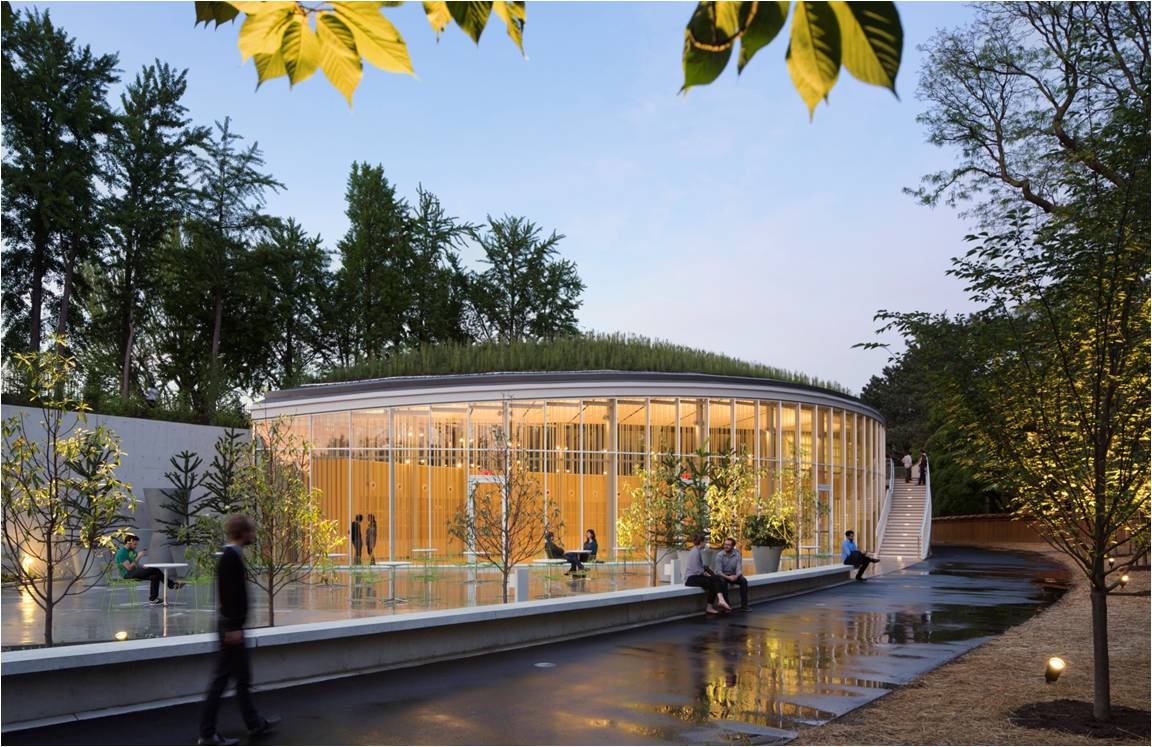 The Diana Center, a ninety-eight-thousand-square-foot multipurpose arts building, is a new center for social, cultural, and intellectual life and brings into focus Barnard’s extraordinary and unique characteristics: strong liberal arts and a world class research institution for women. Landscape rather than building serves as the catalyst of the design strategy for the Diana Center. From the historic entrance gates at Broadway, the design frames a clear sightline linking the elevated heart of the campus at Lehman Lawn to the lower level historic core of the campus. Lehman Lawn is extended in two directions: northward through a stepped terrace that leads to the historic Milbank Courtyard and vertically into an ascending garden that brings the landscape and light into the heart of the Diana Center. Certified LEED Gold, the building’s luminous façade is created with acid etched colored glass modulated to respond to the diverse programs. Envisioned as an innovative center of campus life, the building features the dynamic layering of often separate functions. The program includes architecture and painting studios, a five-hundred seat performance space, a black box theatre, a central reading room, classrooms and seminar rooms and temporary exhibition galleries. 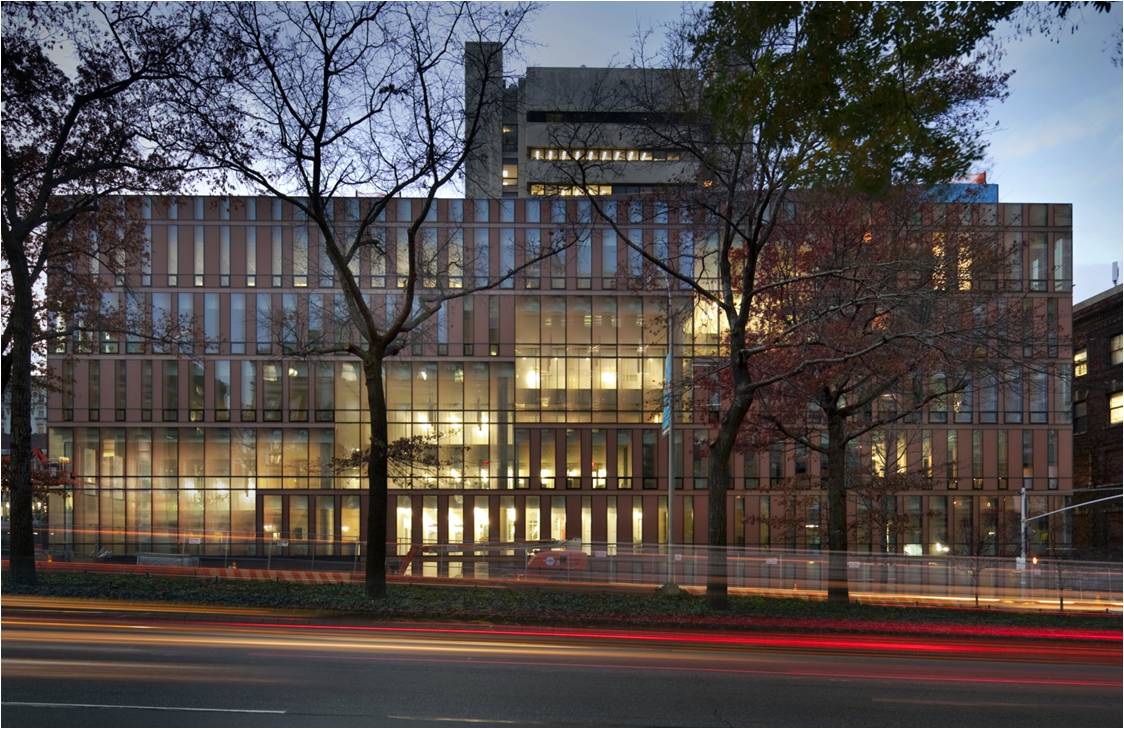 Envisioned as a new urban model for sculpture parks, this project is located on Seattle’s last undeveloped waterfront property– an industrial site sliced by train tracks and an arterial road. The design, a continuous constructed landscape for art, rises over the existing infrastructure to reconnect the urban core to the revitalized waterfront. This landscaped surface, an uninterrupted Z–shaped “green” platform, descends forty feet from the city to the water, capitalizing on views of the skyline and Elliott Bay. An exhibition pavilion provides space for art, performances, a café, gift shop, and educational programming. From this pavilion, the pedestrian route descends to the water, linking three archetypal landscapes of the northwest: a dense temperate evergreen forest, a deciduous forest, and a shoreline garden. As a “landscape for art,” the Olympic Sculpture Park defines a new experience for modern and contemporary art outside the museum walls. Deliberately open-ended, the design invites new interpretations of art, environmental engagement, or simple pleasure, reconnecting the fractured relationships of art, landscape, and urban life. The design is intended to celebrate the great works of art in the park and anticipates the promise of future work. 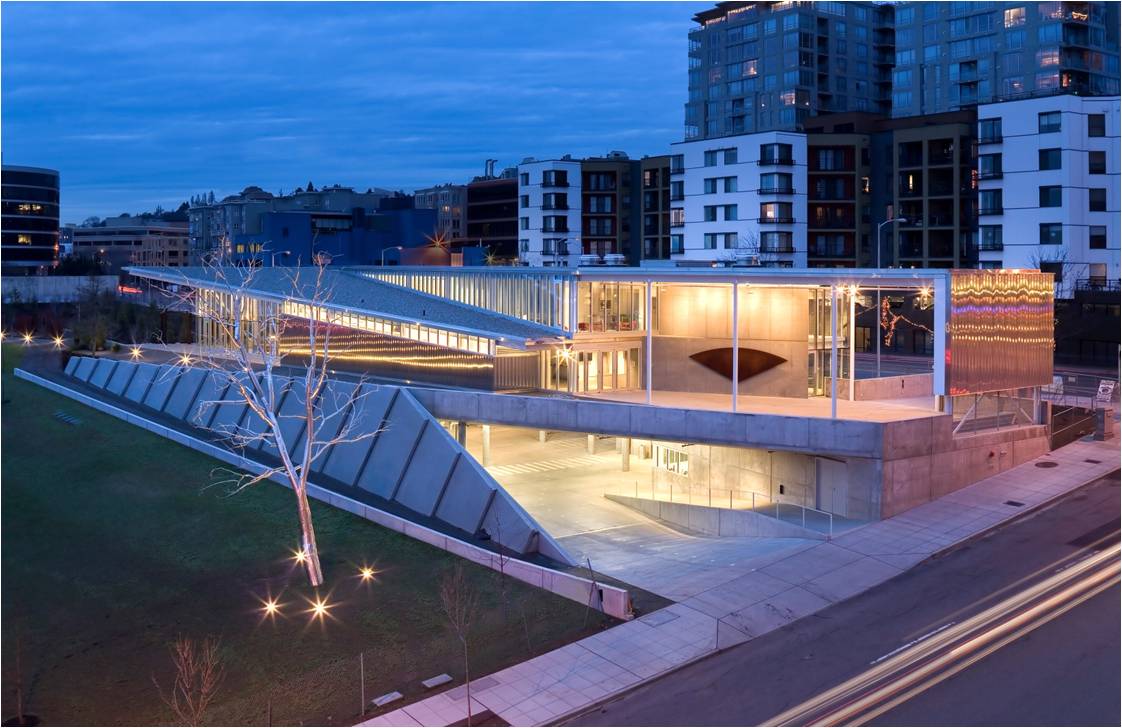 Marion Weiss is the cofounder of WEISS/MANFREDI, a multidisciplinary design practice based in New York City known for its dynamic integration of architecture, art, infrastructure, and landscape design. Noted works include the Women’s Memorial and Education Center at Arlington National Cemetery in Virginia, the Sylvan Theater in Washington D.C., and two projects at historic women’s colleges: the Barnard College Diana Center and the Smith College Campus Center. She teaches design studios focused on the synthetic potential of infrastructural, social, and ecological challenges and is the Graham Chair Professor of Architecture at the University of Pennsylvania where she has been a faculty member since 1991. She has also taught cross-disciplinary studios at Harvard University, Cornell University, and most recently Yale University as the Eero Saarinen Visiting Professor of Architectural Design. In 2014, Marion was inducted into the National Academy of Design. Her most recent book, PUBLIC NATURES: Evolutionary Infrastructures, is inspired by the potential to shape a broader public terrain, with a conviction that art and nature, design and ecology, architecture and infrastructure, are bound together in reciprocity. Prior monographs include Surface/Subsurface and Site Specific. Her work has been exhibited at the Museum of Modern Art, the Solomon R. Guggenheim Museum, the Cooper Hewitt Smithsonian Design Museum, the National Building Museum, and internationally at the Louvre Museum, the São Paulo Biennale of International Architecture and Design, and the Venice Biennale. Her firm’s distinct vision has been recognized with the American Academy of Arts and Letters Academy Award for Architecture, an AIA New York’s Gold Medal, the Tau Sigma Delta Gold Medal, and the Architectural League of New York’s “Emerging Voices Award.” In 2007, WEISS/MANFREDI’s Olympic Sculpture Park for the Seattle Art Museum became the first project in North America to receive Harvard University’s Veronica Rudge Green Prize in Urban Design.