For Rena Sakellaridou and Morpho Papanikolaou, with their studio Sparch, buildings are, above all, hybrid entities. 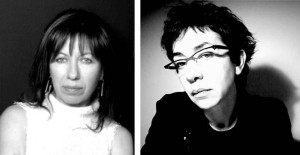 This is not, however, the linguistic hybridization that characterized many experiments of the early nineties, but rather a conceptual hybridization, “between what already exists and that which is only beginning.” Each building, in other words, nourishes the osmosis between its being and the reality that surrounds it, and in this sense the practices of its users become an integral part of the generative process of architecture. In works such as the entrance gate of the Astir Palace hotel in Athens (2008) or the Plasma and Laser Institute in Rethymno, Crete (2015), in particular, the intersection between modern architectural languages of the 1930s and the morphological “explosion” that characterizes the contemporary world is clear, opening it up to thousands of interpretations. www.sparch.gr

“Architecture is a poetics of space and form organized together into a whole by means of architectural order, materiality and light. We believe in the intelligence of the idea, since this generates a process by which the poetics of composition emerge into what we do. There is some kind of intelligence in a problem that needs to be allowed to come to the surface. We believe in the power of the concept, since this takes what before was only a problem and transforms it into something that has a life of its own. Buildings are hybrids. They are born from the meeting of what already exists with what is only emerging, from the osmosis between what lies within and what exists outside. From the internal space, the space-within that gives each one of us our identity, to its encounter with what exists outside, be it city or landscape, program and people and architecture, up to its encounter with the whole of the world in its complexity. Our tools are space and form and geometry and materials. Desire, like ideas, emerges slowly. Desire to express what ignites the creative spark each time some new project appears. Or, the deeper desire to get rid of the unnecessary and to be able to see more clearly.”

A project for Astir Palace: a Gate and a Canopy Astir Palace is a luxury resort 25 km from the center of Athens. During its recent renovation, we were asked to design an entrance gate to replace the old one, and to upgrade the entrance of the Nafsika Hotel (the canopy). In both cases, the theme appeared to be about the in-between. In both cases, we designed an interface. The Gate What is a gate, we asked. What else, but a border, a point of penetration, an interface between the inside and the outside. A gate is also an eye that allows us to see, that discerns between the inside and the outside, that defines recognition and allows penetration. A large ficus tree on site provided a point of reference. Space is fluid, a continuous curve that unfolds in order to enclose, to create the in-between, to accept the natural. Steel structure painted white, transparent and semi-transparent glass, white matte marble on the floor. The Canopy The Nafsika Hotel project is another interface. A series of undulating white metal vertical grids were placed around the air-conditioning ducts on the roof, creating an interesting interplay with semi-transparency and light. The curved form of the canopy extends on the two sides to create a sense of enclosure. The white columns introduce strong verticality. Originating at the Gate, the undulating white metal forms took over the roof of the Nafsika Hotel and then grew out to form the canopy. The choice of the color white was made early on, since this color reflects the strong Mediterranean sun. The vertical white grids brought to mind images of resort architecture from the 1950s. The underlying similarities were brought to the foreground gradually, as the notion of the two projects being interfaces developed. From then on, the two projects evolved through the same concept, which was transformed into space and form, materials and movement.

Framing the horizon We were asked to design a Plasma and Laser laboratory in a landscape at the outskirts of the city. The concept has three core themes: – Landscape: how to have a dialogue with the landscape, that is, how to bring together into the design the steep slope and the horizon with the view of the sea in the distance. – Program: how to bring together the intricacies of the program and effectively integrate them into key design principles. – Technology: how to use design to express the building’s technological innovation. These three themes converge into a building consisting of a solid base, where the horizon is traced through the transparency of a ground level that is essentially a “void“, and a technologically diversified structure, in a state of apparent suspension above the void. A strong base and a floating beam. A horizontal building suspended in the air. In between just glass. Transparency and the desire for suspension of weight. Robust solidity vs lightness. The concept is translated into a synthesis between compact / solid / earthy on one side and white / technological / floating on the other, with the horizon trapped between the two. The base stands firmly on the ground. It is strong, robust. It houses the laboratories and all auxiliary areas. Following strict requirements, the laboratory unit is essentially an independent compound, a separate unit on the ground and not connected with any other element of the building (even its roof is not accessible). It creates a platform for access to the rest of the building, consisting of a transparent ground level and the main office building suspended above the platform. Between the two, the horizon and the view. The long linear volume that houses the offices, in direct dialogue with the horizon, is distinct from the rest of the building. All white, a metal structure with a characteristic geometrical pattern that generates the openings and the grid subdivisions of the facade, its white color and linearity form a floating beam that frames the view.

Books open and closed The building will house the research units of the Academy of Athens. The site, at the intersection of two streets, is in spatial and perceptual continuity with the neoclassical building of the Academy of Athens, itself part of the so-called Neoclassical Trilogy of Athens, which houses the three most important cultural institutions of the city: the University, the Library and the Academy. The building will thus be visible from two of central Athens’ most important main arteries, Panepistimiou Avenue and Academy Street. At the same time, it is only a small corner site, a void in a continuous urban front that reveals remnants of sidewalls, wounds in the urban tissue. This was an extremely challenging project. We wanted to complete the urban front; we had to deal with the corner; we had a program to accommodate and many restrictions. A book that opens and its pages provided the initial idea for the concept, which became ‘books open and closed’. The pages of the book became shutters moving round a vertical axis, recalling the movement of the vertical blinds that transform the front elevation. Subsequently, they generate continuous change during the day, as the building becomes more or less introverted. The tri-partite division of the neoclassical building of the Academy of Athens is transformed into the solid prism of the ground floor, the main body of the building and the penthouse and roof on top. The vertical structure of the Academy’s openings is transformed into the marble blinds, which become the main compositional feature. The front elevation completes the urban front, while the other elevation gradually subsides, widens, welcomes and establishes a dialogue with the Academy building. 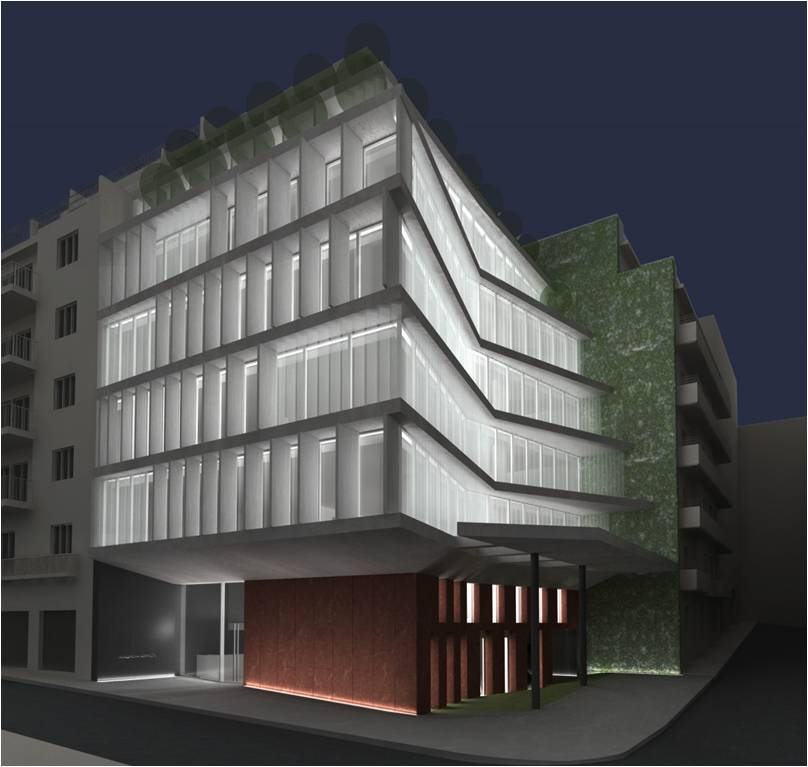 An alternative recycling scenario The site: the old industrial “Anthos” complex in the outskirts of Nafplio was built in 1936, a testimonial to the industrialization of the greater area. It was listed in 2004. Today, after its renovation, it operates as an innovative cluster, as a large interactive piece of art addressing the mind and the senses. The existing complex: dynamic space and silence at the same time. An enclosed typology, with simple geometric stone building blocks, large industrial windows, a pure roof of wood and metal and a chimney are the physical evidence of an active former life with a strong identity. The program: exhibition spaces, library, auditorium, creative workshops, café and gift shop. The main theme: to re-design the existing, the space, the substance, the memory, to give the whole indoor and outdoor area a second lifecycle, to create a “factory” of knowledge and culture, a “living laboratory”. The concept: “unfolding of matter and time”. The memory of space, the simple spatial structure, the enclosed morphology and materiality, acquire a modern narrative power. Architectural approach: emphasis on simplicity, flexibility, reversibility. The program, the existing buildings, the experimental relationship between the buildings and the space, the open space and the new interventions were approached as a single continuously evolving world that engages memory and future. Materials: rough textures, stone and concrete surfaces, metal and wood, stainless steel frames, cast floors, glass and water. Sustainability approach: the existing stone masonry was preserved, while contemporary materials were used as grout between the stones and the internal surfaces. A new roof was constructed, while parts of the existing timber roof and leaky areas were restored, insulation and waterproofing sheets were applied.

EDUCATION Rena studied architecture in Thessaloniki, (Dipl. Arch AUTh), in Vancouver (MArch UBC) and in London (PH.D Bartlett School of Architecture and Planning UCL), commuting for seven years between London and Thessaloniki, combining research with practice. Her studies initiated her long lasting interest in understanding form, space and the logic of composition.

PROFESSIONAL EXPERIENCE Rena and Morpho are founding partners of SPARCH (www.sparch.gr), with offices in Athens and Thessaloniki, Greece. Today, Rena leads the Athens office while Morpho leads the Thessaloniki office. SPARCH focuses on innovative architectural and urban design on different scales. Their first building, a town hall, which won extensive coverage and acclaim, led to a large number of realized public and corporate buildings, many design awards and commissions to design major buildings such as the NBG New Headquarters, the NBG Insurance Headquarters and the Astir Palace Gate and Canopy.

AWARDS One of the most highly acclaimed architectural offices in Greece, SPARCH has received international recognition and its work has been extensively published. It was the curator for the Cyprus Pavilion at the Venice Biennale in 2006 and has received more than 20 prizes in architectural competitions, including 12 first prizes. It has been shown its work at 36 exhibitions, including the Venice Biennale, Milan Triennale, DAM Frankfurt, NAi Rotterdam, RIBA London, as well as in Paris, Montreal, Tokyo and Barcelona. SPARCH has been awarded 12 international and national design awards. They include: High Commendation from the World Architecture Festival 2008, 2000 Award for Best Public Building, as well as two Special Mentions (2008 and 2013) from the Hellenic Institute of Architecture, Aris Konstantinidis Award (2005), two Iconic Buildings Awards for “Concept: Urban Planning” and for “Concept: Visionary Architecture” from the German Design Council (2013). It has also been nominated twice for the Mies van der Rohe Award (European Union Prize for Contemporary Architecture), in 2003 and 2009. It is the only architectural practice in Greece to receive three distinctions from the Hellenic Institute of Architecture.