La Triennale di Milano presents “Giancarlo De Carlo. Unpublished sketches “- on the occasion of the tenth anniversary of his death – from 19 December 2014 to 11 January 2015, to describe the work of a great architect, urban planner and passionate man of culture of the twentieth century. 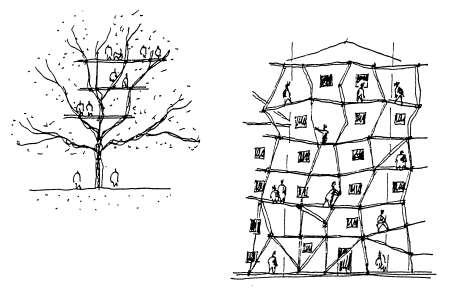 The unpublished sketches on display result from a personal search as suggestions, ideas, or simple diversions, but also as historical evidence of Giancarlo De Carlo’s deep and continuing professional and “political” commitment. The works on exhibition also include the less known “private” catalogue, his love for Greece as a place of mind and a source of much discussion, his passion for freehand sketching, according to a descriptive vein which is sometimes functional to design-led solutions and sometimes purely creative.

A rich and various documentation coming from the private archives of his heirs and the historical archives of the University IUAV in Venice, the MAXXI in Rome and the Beaubourg in Paris.

A small but “precious” exhibition which also uncovers noteworthy personal texts, scale models, video interviews, with the aim to unveil as much of De Carlo’s unity of thought and action of, always searching for an overall coherence and for a never just aesthetic harmony