This year, in addition to the Jury and Popular Choice winners, Architizer is honoring six firms and designers whose vast portfolio of work is arguably the best in the business and pushing the industry toward new heights, including the Lifetime Achievement Award to Odile Decq, in the jury of the arcVision Prize, and the Impact Award to Tatiana Bilbao, among the nominees of the arcVision Prize 2015.

These special honorees are recognized for their outstanding work and innovation in design, including works such as: the Confluence Institute for Innovation and Creative Studies (Decq); and  the low-income housing in Acuña, Mexico (Bilbao).

These six special awards for achievement will be presented at the A+Awards gala on May 11 in New York City. 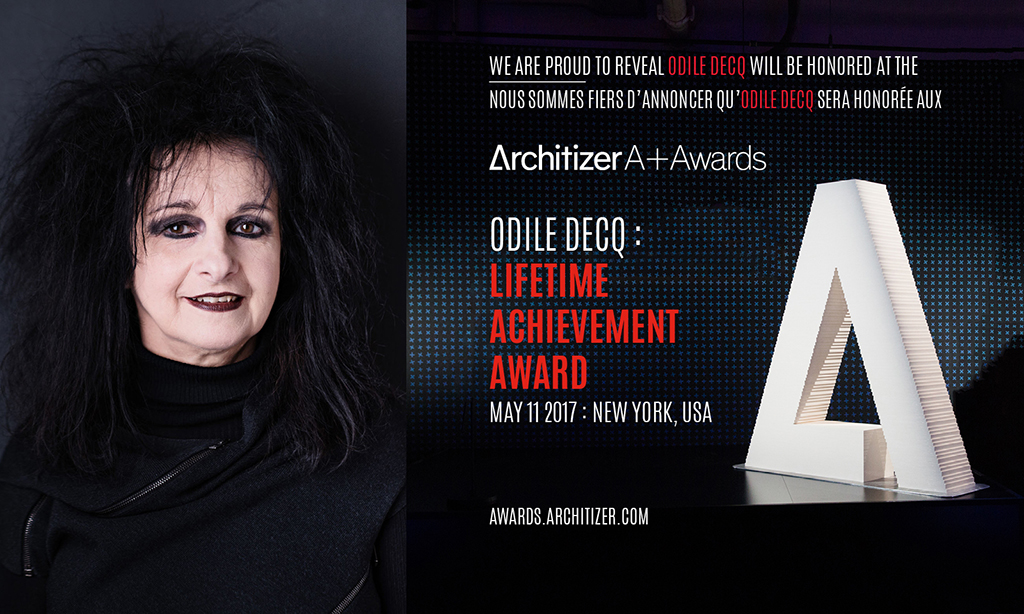 The A+Awards honor the best architecture, spaces, and products from across the globe

With its unique goal to nurture the appreciation of meaningful architecture, the A+Awards present Special Honoree awards to a small group of key influencers each year. These honorees are chosen for their extraordinary contributions to the fields of architecture and design, and highlight projects and creations that are championing architecture’s potential to positively impact everyday life. Over 400 luminaries from the worlds of architecture, art, and design will gather for the gala at Highline Stages in New York City.

Architizer, architectural site leader, announced the winners of the 5th edition of Architizer A+Awards. Through the prestigious Architizer site, the United States has chosen to award with Lifetime Achievement Award Honoree Odile Decq, a French architect known throughout the world – awarded for both her works and her commitment and contribution to the architectural debate, with the following reasons:

« For your unique impact on the architectural profession and your role as an influential thought leader within the global design community. »

Odile Decq has achieved extraordinary success since founding her firm, Studio Odile Decq, in 1978. Her style and persona match her unparalleled designs, which feature bold geometries and eye-catching façades. Decq has also been a long-time advocate for women in design, social justice, equality and sustainability in architecture. 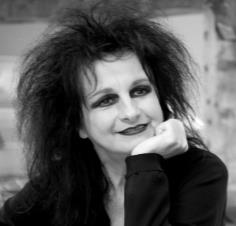 In the Jury of the arcVision Prize Women and Architecture since 2013, Odile Decq set up her own office just after graduating from La Villette in 1978 while studying from Sciences Politiques in Paris where she completed a postgraduate diploma in Urban Planning in 1979.  International renown came quickly; as early as 1990 she won her first major commission: the Banque Populaire de l’Ouest in Rennes recognized by numerous prizes and publications.

By questioning the commission, the use, the matter, the body, the technique and the taste Odile Decq’s architecture offers a paradoxical look, both tender and severe on today’s world. She was awarded with a Golden Lion in Venice in 1996. Since then, Odile Decq has been faithful to her fighting attitude while diversifying and radicalizing her research.

She completed the MACRO (Museum for Contemporary Art in Rome) in 2010, the Opera Garnier’s restaurant in Paris in 2011, the FRAC (Museum of Contemporary Art in Rennes) in 2012, the GL Events headquarters in Lyon in 2014, the Saint-Ange Residence in France and the Tangshan Fangshan National Geopark Museum in China in 2015.

But more than the realization of the Studio Odile Decq, more than a style, an attitude or a process of production, Odile Decq’s work is a complete universe, including urban planning, architecture, design products and art. A versatility that is awarded with the title of “Designer of the Year Maison&Objet” and the Woman in Architecture Prize “Prix Femme Architecte” in 2013. She has just been awarded with the Jane Drew Prize in 2016.

Since a long time involved in teaching, she has created and launched her own School of Architecture in 2014 in Lyon, the Confluence Institute for Innovation and Creative Strategies in Architecture.  Read more

« We do architecture to raise the human quality of life.
We work with our environment, our surrounding materials, hand labor and techniques, opening channels of communication between the various social sectors, and develop productive activities that enable different aesthetic experiences with strong ideas and direct definitions and intentions. We try to understand, though our multicultural and multidisciplinary office, our world, and to translate its rigid codes into architecture.

Through these strands, the office regenerates spaces “humanized” to be aware and react to global capitalism, opening up niches for cultural and economic development, creating a climate of collaboration where there are various disciplinary resonances in technical areas; theoretical and artistic works which, in one way or another affect the patterns and structures of society.

The office associates work to the theme of resonance, which matches the frequency of a given system with the frequency of an external drive, with certain information generated by another system.
As with the ethics of otherness of Levinas, the office incorporates the other, which has not been recognized or accepted by the intellectual, political, or business oligarchy, but that is on the lookout for a qualitative change in structural life. To this end we are building with the responsibility of understanding all that we do and we mean to do, learning though it and working with it. » www.tatianabilbao.com

1972 – Mexico City, Mexico
Tatiana Bilbao, nominee arcVision Prize 2015, studied Architecture and Urbanism at Universidad Iberoamericana in 1996, where she obtained her degree with honors. She has developed projects of architecture and urbanism in diverse fields, both public and private.

She worked as an advisor for Urban Projects at the Urban Housing and Development Department of Mexico City and in 1999 she joined and co-founded LCM S.C. In 2004 she founded Tatiana Bilbao S.C. with projects in China, Europe and Mexico. Tatiana was awarded with the Design Vanguard as one of the Top 10 emerging firms of the year in 2007 by Architecture Record and named as Emerging Voice by the Architecture League of New York in 2009.

In December 2010, three projects were acquired by the George Pompidou Centre in Paris, France, to be part of their Architectural Permanent Collection. She has been visiting professor at Andres Bello University in Santiago de Chile, at Peter Behrens School of Architecture, Düsseldorf, Germany. Starting in Spring 2015, she is going to be Louis I. Kahn visiting assistant professor at Yale. Her work has been published, among others, in A+U, Plot, GA Houses, Domus and The New York Times.

Selected project at the arcVision Prize 2015

The objective of this project is to design a prototype of popular housing with quality material and space, at an affordable price. The life we develop in our houses is not uniform, homogenous or steady.

The different needs that appear along the life may require the adaptation of space in order to continue living in terms of adequate housing, adjusted to the economy, the use of space, the expense of energy and the environment in which the house is located.
The prototype would adjust intensively, occupying the land from the nuclear core of the house according to the family growth the house.

The project could be applied in large housing developments, going against the monotonous and uniform existing complexes. We want to generate units with the capability of adaptation to the diversity and multiplicity of the population. Therefore, the project could have variations in program, plans and materiality with the purpose of obtaining a greater diversity that can fit the different needs of the country. 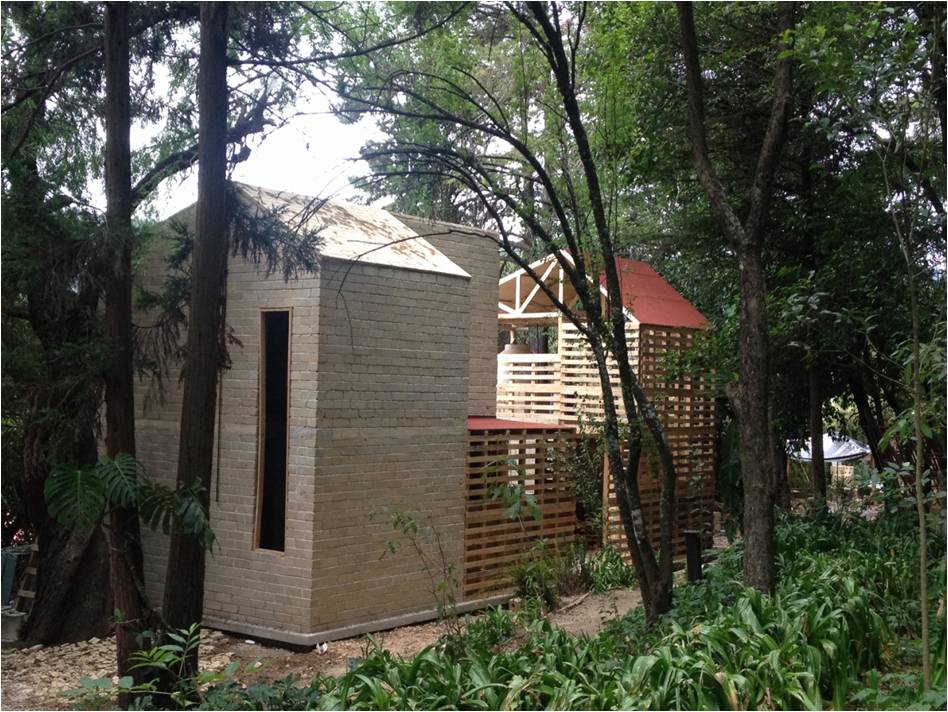