Among the design constants that allow us to identify a good part of recent architecture from Northern Europe as “Nordic Architecture” are the pursuit of volumetric simplicity, often to the very limits, compositional transparency, and a great concern for the technological and expressive qualities of materials. 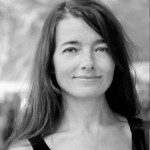 Similar qualities are taken to the extreme by Petra Gipp, one of the young female designers of greatest relevance in the Swedish school. Rational and sculptural, her architecture places the theme of mass at the center of the research process; they are primordial, well defined volumes that strongly affirm the surrounding landscape. This can be seen, for example, in the massive building The Cathedral at Linköping (2014), a laboratory for creatives and audiovisual design that emphasizes the relationship between form and technology, establishing itself as a sort of crucial innovation “bunker” at the intersection between the city and the open expanses of the Swedish countryside. www.gipparkitektur.se

“My ambition is to create architecture with a thoughtful relationship with the client’s requirements and the nature of the location. My work is based on a core idea that continues down to the design of the parts and the choice of materials. My work blends architectural and sculptural expression and I strive to create works that form an architectural study where artistic expression is explored together with structural technological and sustainable solutions. To be able to develop my own expression and ideas, I started the Petra Gipp Arkitektur practice in 2009. I’m the sole owner of the studio and am deeply involved as the architect of record for all the projects.”

The site is a complex context, where the dense urban grid meets small wooden buildings and where individual elements such as Malongen and Katarina Södra School creates new directions. The proposal links the site’s various scales and orientations, and creates a green route, in the form of a new park, between Nytorget square and Vitabergen park. The buildings will be built in solid wood, which offers a cleaner type of house construction; wooden houses can be built twice as fast as concrete buildings. The project is developed in close collaboration with our client Folkhem, who have decided to build only in wood, and with Martinsons, a leading supplier of construction systems in wood. The existing height difference between Nytorget square and the new park allows public activities on two levels and thereby activates both sides of the park trail. Malongen is integrated into the park, which opens to the more extrovert activity of the artists who have their studios here.

The buildings are intended as cohousing, with communal premises for meals, work and socializing, as well as public activities such as education, day care for children, socializing, a dance floor and clubs. An important idea is to let the park trail extend up to the buildings. Along the access balconies and large roof terraces, residents can grow vegetables, herbs and flowers. Another common room for residents is located on the roof. The proposed two volumes of solid wood are given a contemporary expression and identity that creates a clear imprint on the place. Small duplex apartments overlook Nytorget square and Malongen, without defining the front or back, which is important for the location. This part of the building is transparent at the entry level and thereby enables transparency and contact between the parks. A lower volume faces the older wooden buildings. A stand-alone volume connects the park trail with the city. The buildings form a unified whole for a clear dialogue with the surrounding buildings. 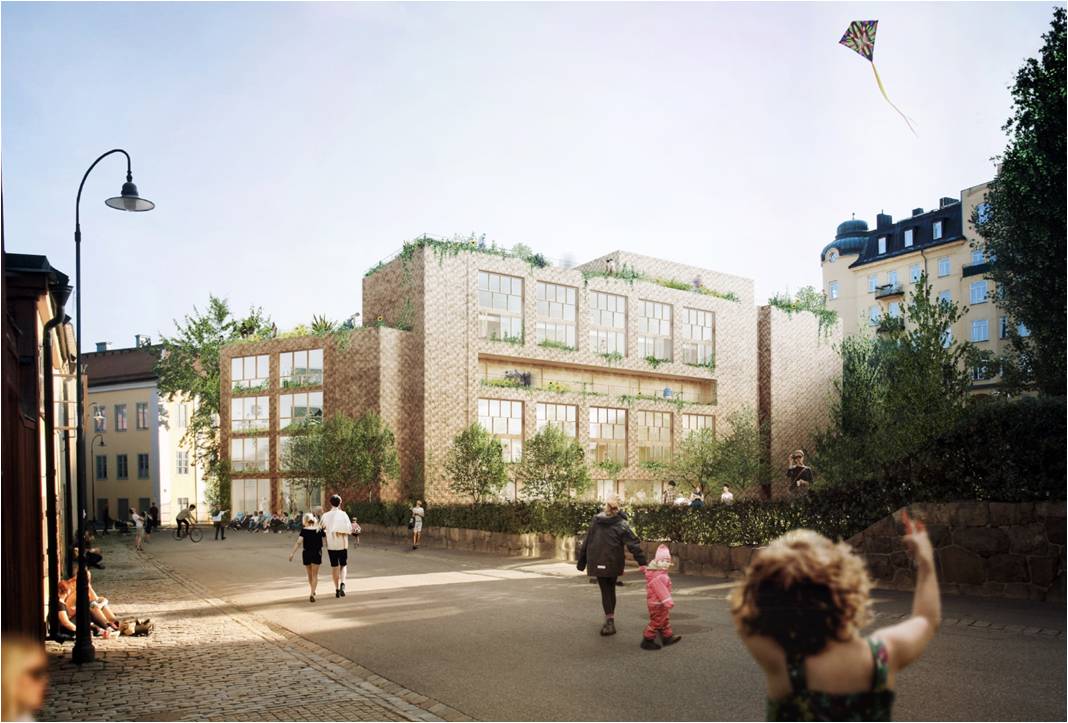 The service building consists of two different volumes in two different materials, concrete and wood, supporting each other. Where the volumes meet, circulation is enabled by a cast-in-place concrete staircase linking workshops, administration and staff. The service building is constructed with truly sustainable materials, which will age naturally and beautifully. The traces and defects from the casting process have been left visible in the stairs and floor. The prefabricated concrete elements of the facade show both their faces, the smooth face outwards and the coarser face inwards. The wooden facades and interior walls are built with long boards of fir, treated with a coat of linseed oil on the exterior but untreated inside the building. Natural passive ventilation and geothermal heating is used, the green roof is made of sedum while the detailing is in zinc. The inner courtyard facade with its recessed doors and the windows of the administration unit provide a quiet workspace as well as the opportunity to see into the administration building.

This is a place for all faiths. Consequently, it addresses the passage from life to death from a humanistic rather than religious perspective. For the people working at the cemetery, we want the building to have dignity and to provide beautiful spaces as well as carefully balanced light and views from the different functions. The building integrates with the site’s rich, magnificent nature. It faces northwest. The workshop reaches up towards the slope where oak trees grow, pointing in the direction of a future chapel. The long concrete facade with its relief effect stretches out to form a backdrop for the cemetery and shelters its tranquility from the activity of the courtyard. The building forms an entrance into the park and cemetery. A building that states its practical function and draws on the industrial, but also expresses pride and ease, resonating with the free design of the cemetery. 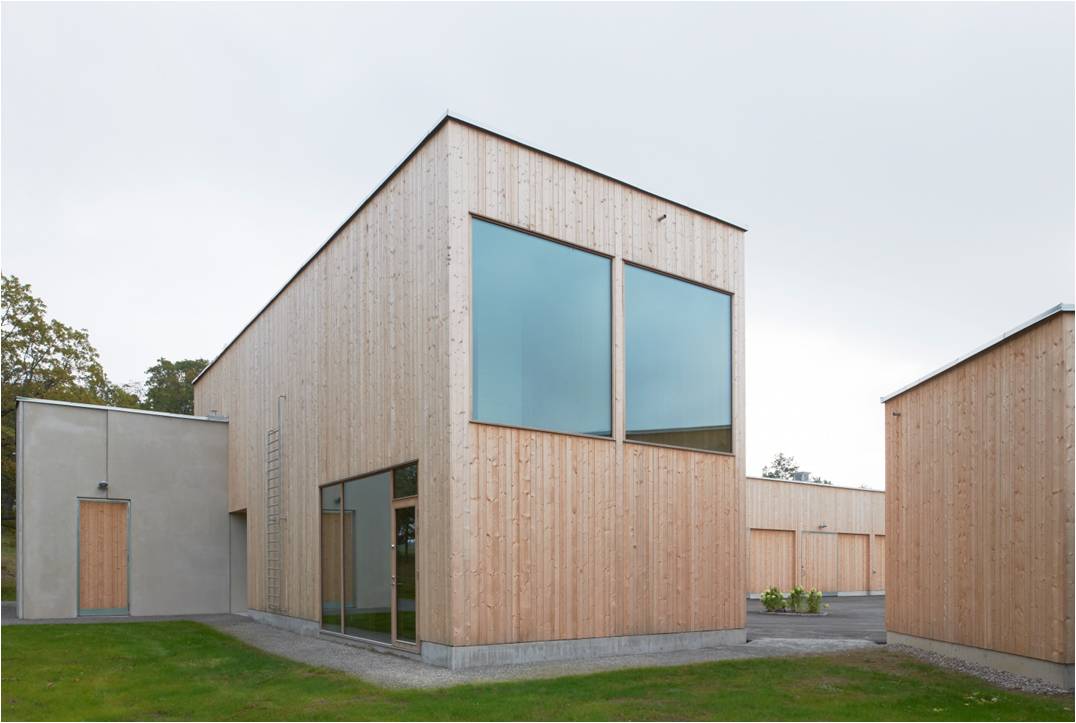 The Cathedral – an inventor’s workshop for audiovisual design, is a building that operates in the field of tension between two different landscapes, both as form and as idea. The materials of the building allow themselves to be transformed as the workshop develops; they are left to change through the reworking and adding of layers. This capacity for transformation makes the building durable and lasting. The concrete core has a large thermal mass, which helps provide a stable indoor climate. The Cathedral is located on the boundary between technology and untouched reedland. Mjärdevi Science Park with its large-scale buildings on the one side, and the boundary area between infrastructure and buildings, where reedland and marshes have been allowed to expand. The building’s location and design is a consequence of this context, wedging itself into the existing built environment and opening up to the surrounding landscape, both in plan and section.

The Cathedral’s closed and somewhat secret volume carefully turns its distinctive entrance away from the surrounding buildings. It houses audiovisual design work and provides a space where inventions can be tested and showcased. The volume’s interior is an enclosed space, which creates a focus on experiencing the projections and sound. Art and cultural events take place here, as well as exhibitions, happenings and other meetings attended by visitors from all over the world. Inside the building, the large open central space links to smaller rooms, intended for work in privacy. The building’s sculptural form in rough tarpaper, concrete and spruce plywood defines the workshop, where its essence manifests itself in the volume’s interior. It gives clarity in relation to both the site and the program, creating a space for concentration and providing focus inside the workshop, while the inner room connects to the landscape and creates a place in close relationship with the expanses of land. 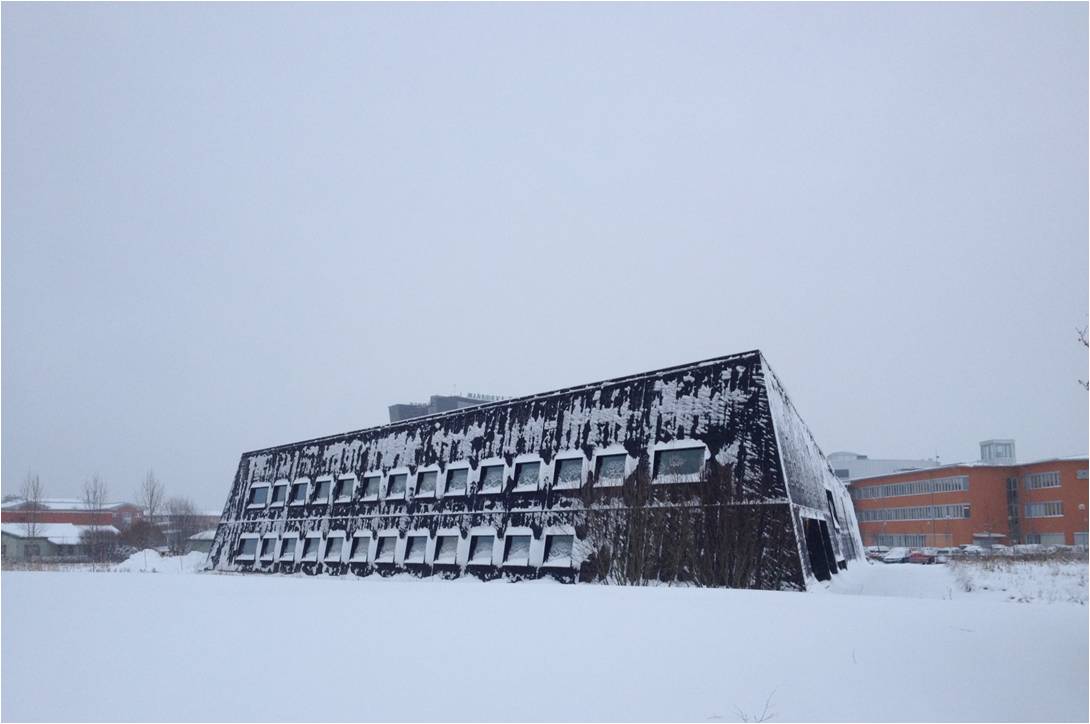 Liljevalchs’ new extension stands out as an explicit part of the museum, a sculpted volume with its own identity. The extension interacts with Liljevalchs’ existing compact, closed body, interprets its architecture and organization, and gives the site a contemporary sculpted imprint. With the Blå Porten garden café, Liljevalchs is a cohesive system that clearly defines an outer boundary, where mass and scale create inner and outer rooms that clearly relate to the art gallery’s complex context and to the city. The new extension is consistent with the initial imprint and register of the existing facilities. The proposal is effective in terms of sustainability, finance, operation and safety. The building and the atrium act as a climate shell for the old building, the south façade is shaded, thereby minimizing the need for cooling. The ramp provides sun protection for the entrance hall, reducing excess heat. The building’s heavy frame has a climate-controlling effect.

A concrete wall, with possibilities to sit and rest along the terrace, allows the extension to embrace the old building’s external volumes. The location of the new art gallery is a clear convergence between different scales, between the old and the new, between cultural institutions and entertainment facilities. The place opens up generously to the bay of Stockholm and connects to a new dock. The staff areas are organized around the atrium to provide good natural light without direct insolation and a good workflow. Break rooms, rest rooms and the meeting room are adjacent to the offices. The meeting room with capacity for 30 people is located along the terrace and receives light through the window. The materials, configuration and organization are integral to the site and the history of Liljevalchs. The reinforced concrete construction in the sculpture hall’s coffered ceilings, the copper clad lanterns, the wooden details and the large glazed openings in the existing building, have all been understood and reflected in the new building’s character. 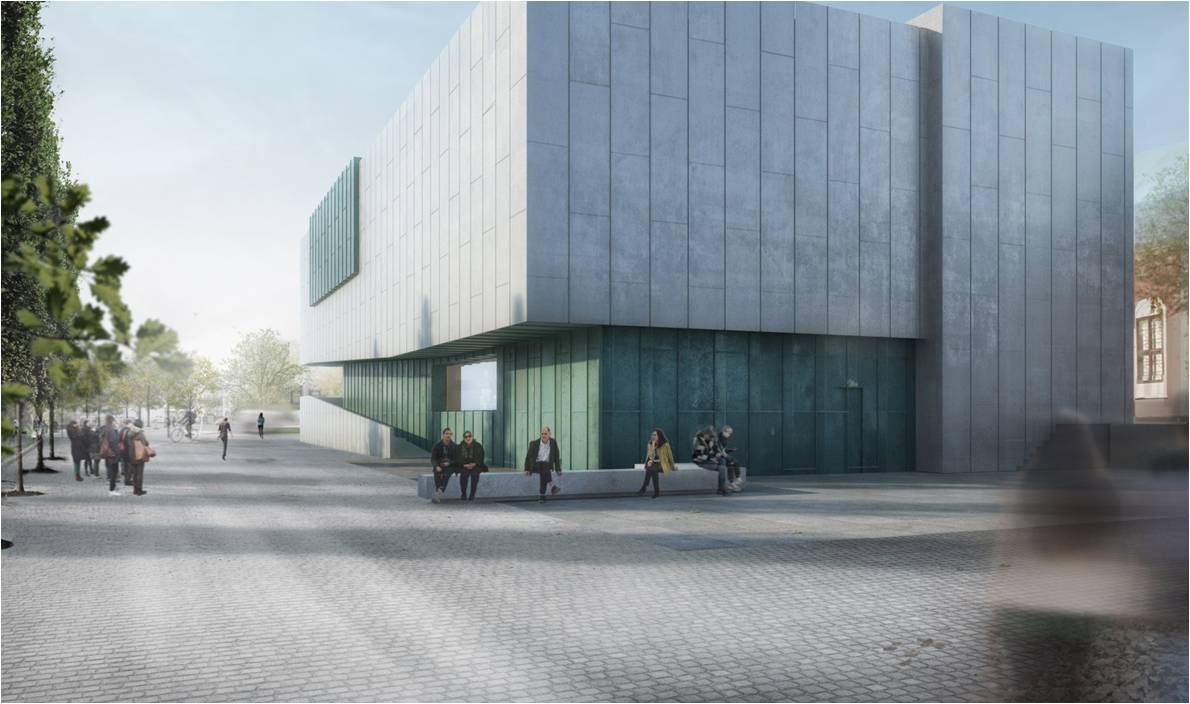 My projects include the award-winning Kivik Art Center and The Cathedral inventor’s studio. I trained at The Royal Danish Academy of Fine Arts in Copenhagen and have exhibited widely, notably at the Venice Architectural Biennale in 2012 and 2014. My work has been published in many leading books and magazines. I am currently working on a book that examines the basic elements of building for a deeper understanding of architectural values. By linking an examination of built projects with an analysis of the model, text and drawings, the book offers several keys to the reading of the architectural elements. The project is intended as a contribution to a new analysis of Nordic architecture. I am a teacher and external critic at the KTH Royal Institute of Technology – architecture, in Stockholm, and an examiner at The Aarhus School of Architecture, Kolding School of Design, and The Royal Danish Academy of Fine Arts, Schools of Architecture, Design and Conservation. I am a member of several important competition juries, including The Kasper Salin Award 2015-2016 of the Swedish Association of Architects.